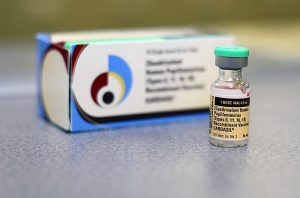 The 2014 national immunization study from the Centers for Disease Control and Prevention (CDC) reveals that many teen girls in Michigan receive the first dose of the human papillomavirus (HPV) vaccine but never return to complete the three-shot series.

The study found that two-thirds of girls between 13 and 17 receive the first dose of the vaccine in Michigan while the national average is a lower 57.1 percent. Michigan also beat the national average for second injections with 49.4 percent of patients returning for a second injection compared to 47.4 percent nationally. However, in terms of completing the HPV vaccination series, Michigan has the lowest rate in the country. Only 53.3 percent of girls who received the second vaccination go on to complete the cycle with a third injection.  The national average for completing all three shots is 70 percent.

Rhode Island had the highest second shot percentage with 78 percent while Utah and Arkansas had the lowest second injection return at 44.3 percent.

Doctors especially urge teen girls to receive the HPV vaccination because the disease is the leading cause of cervical cancer in women. In Michigan, only 30 percent of boys received one dose of the vaccine while 31.8 percent received the entire course. Nationally, 34.6 percent of boys have received at least one shot while 48 percent of those same boys completed all three vaccinations.

On a positive note, the CDC has announced that HPV vaccination rates are steadily increasing throughout the United States. The study also found that 30 percent of parents are unaware that an HPV vaccine exists. Researchers believe that proper education could push full HPV vaccination numbers to 91 percent.