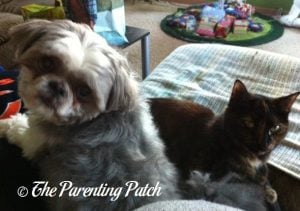 According to a recent study by researchers at the University of California, San Francisco presented at the 2012 General Meeting of the American Society for Microbiology, children who grow up in homes with pet dogs have a decreased risk of asthma because dog-associated house dust offers protection against RSV, a common respiratory virus associated with the development of asthma in children.

Respiratory syncytial virus, or RSV, is a virus that causes mild, cold-like symptoms in adults and older healthy children but can cause more serious problems in young babies and individuals in high-risk groups. RSV is the most common cause of lung and airway infections in infants and young children. Children who develop serious symptoms associated with RSV are at an increased risk for asthma later in life.

However, living in a home with a dog appears to offer some protection against RSV. As Kei Fujimura, one of the authors of the study, explains:

“In this study we found that feeding mice house dust from homes that have dogs present protected them against a childhood airway infectious agent, respiratory syncytial virus (RSV). RSV infection is common in infants and can manifest as mild to severe respiratory symptoms. Severe infection in infancy is associated with a higher risk of developing childhood asthma.”

According to Fujimura, the mice that were fed the dog-associated house dust faired better than the group infected with RSV but that was not exposed to the dust:

“Mice fed dust did not exhibit symptoms associated with RSV-mediated airway infection, such as inflammation and mucus production. They also possessed a distinct gastrointestinal bacterial composition compared to animals not fed dust.”

In a previous study, Fujimura and her colleagues concluded that living in a home with a dog is associated with greater bacterial diversity and fewer fungal species in house dust, which suggests a potentially microbial-based protection against the development of autoimmune disorders such as asthma. As Fujimura comments:

“This led us to speculate that microbes within dog-associated house dust may colonize the gastrointestinal tract, modulate immune responses and protect the host against the asthmagenic pathogen RSV. This study represents the first step towards determining the identity of the microbial species which confer protection against this respiratory pathogen.”

Understanding how the microbes in dog-associated house dust protect against asthma will lead to better treatments for RSV, which will thus help to prevent children from developing asthma.