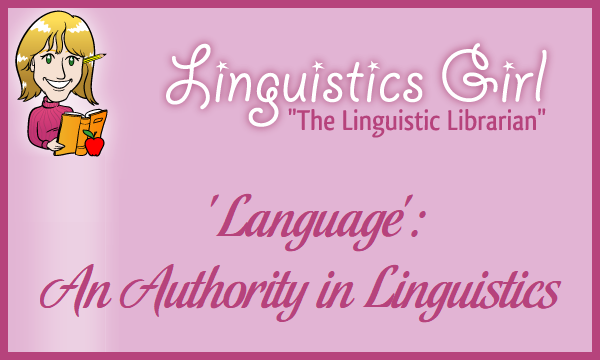 Language is the scholarly journal published by the Linguistic Society of America (LSA), which is a professional group for linguists founded in 1924 whose stated mission is to advance the field of linguistics, the scientific study of language (LSA: Publications; LSA: About LSA). Currently edited by Gregory N. Carlson of the Department of Linguistics at the University of Rochester, the journal has been published quarterly and continuously since 1925 (Project Muse; JSTOR). The journal is available in both print and electronic formats (LSA: Publications). Primarily available through institutional subscription, only members of the LSA may purchase an individual subscription to the journal. Language, thus, establishes an initial claim to authoritativeness via its affiliation with a longstanding and highly respected professional organization in the field on which the journal publishes. The length of time (eighty-five years) over which Language has been published also garners authority for the journal.

As indicated in the Information for Contributors section in the back of the print version of the journal (86.3), Language publishes “technical articles dealing with problems of linguistic science, reviews of recently published linguistic works, and notes of interest to professional linguists.” According to the JSTOR description of the journal, articles published in Language cover topics such as “linguistic theory (phonology, morphology, syntax, and semantics); language description; language in its social setting; the history of individual languages; language acquisition; experimentation on language perception, production, and processing; computational modeling of language; and the history of linguistics” (JSTOR). In general, at least one contributor of any article or review submitted to the journal for consideration for publication must be a member of the LSA (Language). Although the requirement for contributors excludes researchers who are not LSA members, membership is open to anyone interested in joining who is willing to pay the required annual dues (LSA: Members). Notable past contributors to the journal include Leonard Bloomfield, Noam Chomsky, Joseph Greenberg, Alfred L. Kroeber, Steven Pinker, Edward Sapir, Deborah Tannen, and Benjamin Lee Whorf, all of whom are reputable scholars and researchers in the field of linguistics or related disciplines such as anthropology, psychology, and cognitive science (JSTOR). The credibility of past contributors further establishes authority for Language as an authoritative journal in the field of linguistics.

Each print issue of Language is organized into three sections: (1) articles, (2) reviews, and (3) recent publications. The largest section featured prominently at the beginning of the journal contains the most recent scholarly articles. Although shorter articles are encouraged and longer articles considered, the editorial policy of Language favors submissions of fifty manuscript pages or less for consideration for publication (Joseph 218). In the first three issues of 2010, each issue contains four to five articles that range in length from twenty-eight to sixty pages. Printed immediately after the articles are approximately fifteen reviews of recently published books of interest to the field of linguistics. An average review ranges in length from two to five pages. The final section of each issue provides a list of recent publications that “appear to bear on the scientific study of language” (Language). Some but not all issues also include sections entitled Letters to Language, Review Article, Short Report, Discussion Notes, and The Editor’s Report that provide additional or supplementary information about a linguistic topic, the journal, or the LSA. Finally, tucked away in the last few pages of each issue are advertisements for books, journals, meetings, programs, and institutions related to linguistics. Not all of the journal focuses on scholarly research in linguistics; however, by dedicating the largest and most prominent section of each issue to articles, Language further asserts its authoritativeness in the field.

Language, however, is not without criticism. In a letter to the journal in the September 2010 issue, Sean A. Fulop of the Department of Linguistics of California State University, Fresno writes of his disappointment over the current editorial policy of the journal. Fulop references an editorial from the June 2002 issue in which previous Language editor Brian D. Joseph outlines the types of articles considered acceptable for publication in the journal. Joseph quotes another former editor, Sally Thomason, who explained that, although the editors consider “all subfields and all theoretical approaches” appropriate for the journal, only articles that “hold potential interest for linguistics in all subfields of the discipline” are appropriate for publication in Language (Joseph 218). Thomason states that, instead of inclusion in Language, articles of specialized topics should be submitted to specialized journals. As Joseph (218) further explains, all articles considered appropriate for publication in the journal must appeal to “general interest” in the field of linguistics. Fulop (485) argues that the current editorial policy “had the effect of reducing the journal’s content to only those papers that 90% of linguistics can understand, while simultaneously restricting publication to papers that could command the attention of every linguist.” In other words, although the journal appears to strive towards publishing any article of linguistic interest, editorial practice restricts the content of Language to only articles of general interest. However, because the editorial policy of the journal is made explicit, Language maintains its authority as a scholarly journal in the field of linguistics.

As published in the September 1984 issue of Language, the article “The English Auxiliary System: A Lexical-Functional Analysis” by Yehuda N. Falk exemplifies a prototypical article published in the journal. At twenty-six pages, the article fulfills the page length preference of fifty or fewer pages. The author, who presumably was a member of the Linguistic Society of America at the time of his submission of the article to the journal (The September 1984 issue lacks information on contributor requirements.), was affiliated with the Massachusetts Institute of Technology as a graduate student in 1984 and is currently an Associate Professor of Linguistics in the Generative Linguistics branch of the Department of Linguistics at The Hebrew University of Jerusalem (“Yehuda”). Although focusing on an analysis of the English auxiliary verb system from the formalist framework of the theory of Lexical-Functional Grammar (LFG), the article did appeal to a broader linguistic audience at the time of publication. (During 1984, the Chomskyan grammar framework of Generative Grammar from which LFG developed dominated the study of grammar within the field of linguistics.) Thus, the article supports the mission, policy, and authority of the journal.

However, Falk and his article “The English Auxiliary System: A Lexical-Functional Analysis” are, too, not without criticism. Although he attempts to make his analysis accessible to all linguists in any subfield of the discipline by including an overview of the grammar framework in the introduction of the article, his argument and supporting evidence are largely incomprehensible to the reader who lacks an extensive background in the theory of Lexical-Functional Grammar. First, Falk uses terminology with specific meanings within the LFG framework but fails to provide corresponding definitions. A linguist working within a framework other than LFG may misinterpret or not understand the arguments containing terms like oblique goal, relation-changing rules, functional equations, minimal lexical entries, and complete lexical entries as Falk employs the terminology. Second, the notation with which Falk illustrates his analysis of the English auxiliary verb system is presumably specific to Lexical-Functional Grammar. For example, some of the diagrams that seek to visually clarify the LFG framework resemble the grammar trees of other grammar frameworks but with some slight, albeit significant, differences. Without a thorough knowledge of the notational scheme that Falk employs, understanding the evidence that supports his analysis is difficult if not impossible. Therefore, although the article as a whole strives to appeal to general interest, the details are too specialized to hold potential interest for linguistics in all subfields of the discipline.