Connect
To Top
InformationDecember 14, 2019 This post may contain affiliate links 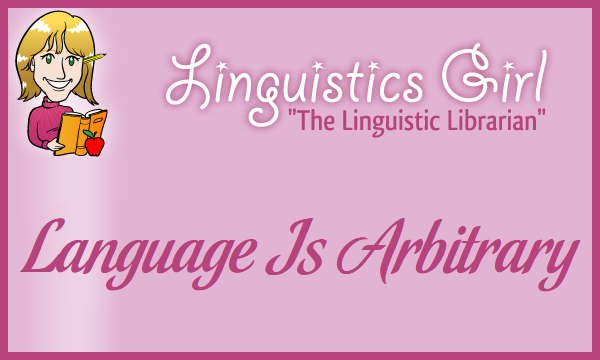 First, what is meant by arbitrary? Some dictionary definitions of arbitrary include (1) based on random choice or personal whim, rather than any reason or system, (2) existing or coming about seemingly at random or by chance or as a capricious and unreasonable act of will, (3) based on chance rather than being planned or based on reason, (4) something that is determined by judgment or whim and not for any specific reason or rule, and (5) based on individual discretion or judgment; not based on any objective distinction, perhaps even made at random.

Language is arbitrary because a language form does not have an innate or natural relationship with its meaning. English uses the words turkey and dog to refer to ? and ?. But the signified ? does not possess “turkeyness” and the signified ? does not possess “dogness.” If ?  and ? possessed turkeyness and dogness, then German would not use the words Truthahn or Pute and Hund and Spanish could not use the words pavo and perro. If the affixation of an -s or -es suffix possessed inherent plurality, then Italian would not change the suffix of gatto meaning “cat” to gatti meaning “cats.” Sotho could not use loti meaning “singular money, currency” and maloti meaning “plural money, currency.”

Language is arbitrary because of the lack of a natural relationship between the signifier (language form) and the signified (referent). Words and other forms have meaning only as parts of a system, with each form deriving meaning solely from its difference from the other forms in the system. Language forms are arbitrary rather than iconic. The road sign that consists of a person holding a book, a sign that refers to a library, is iconic. An icon bears a relationship with that which the icon represents. The pictorial representation of a person holding a book bears a direct relationship with an actual person holding a book, an action that can occur in a library. The English word library, Africaans word biblioteek, and Czech word knihovna bear no inherent relationship with the place that houses books and other information.

Because language is arbitrary, language is not a code. Some definitions of code include (1) a system for representing information with signs or symbols that are not ordinary language, or the signs or symbols themselves, (2) a system of words, letters, figures, or other symbols substituted for other words, letters, etc., especially for the purposes of secrecy, and (3) a system of replacing the words in a message with other words or symbols, so that nobody can understand it unless they know the system. A code is not arbitrary. The symbols of a code (signifier) shares an inherent relationship with that which the symbols represent (signified). Language is arbitrary, so language is not a code.

One recent reply that I received to stating that language is arbitrary is that “English is 80% predictable.” The 80%-predictable argument comes from phonics. Phonics is a method of teaching reading that correlates sounds to graphemes. Phonics fails because not all graphemes spell sounds. Some graphemes can spell the zero phone. The <p> in <pteranodon> spells the zero phone while the <p> in <helicopter> spells the phone [p]. Graphemes can also function as markers such as the <d> in <Wednesday> and the <b> in <debt>. There is also the single final non-syllabic <e>, or replaceable <e>, which is the lynchpin of the English spelling system. Phonics likes to make claims such as “20% of English phonemes have predictable spellings 90% of the time” and “10 phonemes are predictable 80% of the time.”

Phonics is flawed method for teaching reading, but English orthography is still rule-based, which is the point that the 80%-predictable argument tries to make. <fish> can spell [fɘʃ]. <*ghoti> cannot spell [fɘʃ] because of English spelling rules. <gh> is an English grapheme, but one that spells [g], not [f]. The <o> in <women>, which comes from Old English <wimmen>, spells the phone [ɪ]. <*ti> is not an English grapheme. Many phonics programs erroneously claim that <*tion> is a suffix. Only <ion> is a suffix as evidenced by <act + ion -> action>. Graphemes cannot cross morphemic boundaries. However, <phish> can spell [fɘʃ]. Although, as homophones, <fish> and <phish> are spelled differently and have different meanings. But <phish> does not violate the rules of English spelling. The grapheme <ph> can spell the phone [f] at the beginning of a word.

Language is arbitrary, but language is also rule-governed. A construction such as *Cat the bitten has dog the is grammatically incorrect in English. In English grammar, a determiner such as the precedes a nominal form such as cat and dog. An auxiliary verb such as has likewise precedes a main verb such as bitten. Language is conventional. The conventionality of language refers to language rules being established by accepted usage. In English, determiners precede nominal forms and auxiliary verbs precede main verbs. But there is no inherent reason for either grammar rule, or any grammar rule. A determiner could follow a nominal form. Furthermore, a language does not even have to have the distinct category of determiner. Language is rule-governed, but the rules are also arbitrary.

The formation of words in a given language is also rule-based but arbitrary. In English, the suffix <ion> can form a noun from a verb such as action from act and flexion from flex. Without knowing the meaning of a word like <dehydrogenation>, I can ascertain that the word is a noun formed from a verb because of the final <ion> suffix. I can also peel off an <ate> suffix before the <ion> and a <de> suffix at the beginning of the word. The full word sum for <dehydrogenation> is <de + hydr + o + g(e)n(e) + ate + ion>. Knowing bases and affixes allows me to figure out the spellings, pronunciations, and meanings of words. Rules for word formation also help me learn and even create new words. But the bases, affixes, and word formation rules are all arbitrary. <ion> can form a noun from a verb in English. <ung> can form a noun from a verb in German. Language is arbitrary. Otherwise, all languages would use the same forms to perform the same functions.

Language is arbitrary, conventional, and rule-governed. Language codification can also occur. Codification refers to the process of selecting, developing, and prescribing a model for standard language usage. A standard language is a variety of language that has undergone codification of grammar and usage. Written language is largely codified. I, a speaker of the St. Louis Corridor of the Inland North of American English, can read written English just as well as a speaker of any other English. I pronounce <been> as [bɛn] while speakers of other Englishes might say [bɪn] or [bi:n]. But we all read <been> as the past participle of <be> regardless of pronunciation. If you look at Old English writing, you might find multiple spellings for the same word across manuscripts or even within the same text. Codification continues today. American English refers the <plow> spelling while British English tends to use <plough>. A search of COCA reveals <plow> (1665) is much more common than <plough> (145). Both spell [plaʊ]. Neither bears an innate relationship to “a farm implement dragged through the ground to break up the dirt for planting seeds.”