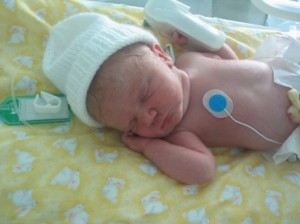 According to a new study published in the journal PLOS ONE, bacteria may cause premature preterm rupture of membranes (PPROM) in pregnant women, often leading to the premature birth of the baby.

PPROM occurs when the fetal membranes rupture (water breaks) prematurely, or prior to 36 weeks of gestation. As Amy P. Murtha, an associate professor of obstetrics and gynecology at Duke University School of Medicine, explains:

“Complications of preterm births can have long-term health effects for both mothers and children. Our research focuses on why the fetal membranes, or water sac, break early in some women, with the overall goal of better understanding the mechanisms of preterm membrane rupture.”

In a previous study, Prof. Murtha and her colleagues discovered that infection is linked to a higher rate of cell death in the chorion, which can result in PPROM.

In the present study, the researchers discovered that pregnant women who suffer from PPROM tend to have thinner chorions. Mothers with chorioamnionitis, an inflammation of the fetal membranes due to a bacterial infection, had the highest rate of chorion cell deaths.

To determine if any patterns between presence of bacteria and membrane thinning existed, the researchers collected samples from 48 women after the women gave birth. The participants included women who gave birth at term and preterm and women with PPROM.

The researchers then measured the amount of thinning in the chorion membrane as well as the the presence of bacteria, both near and far from the rupture.

Furthermore, despite previous thought that the fetal membranes create a sterile environment, bacteria were present in all the samples. Unsurprisingly, bacteria levels were also higher at the site of the rupture. Additionally, women who experienced PPROM had the highest levels of bacteria at both the site of the rupture and at other locations on the sac. The most bacteria were present at the thinnest areas of the chorion.

The results of this study establish a link between bacteria and early rupturing of the fetal membranes. However, Prof. Murtha cautions that the link is not yet causal:

“We still know little about changes occurring within the fetal membrane in the presence of bacteria, but our data suggest the chorion and its thinning may be the battleground for these changes.”

“For instance, if we think that certain bacteria are associated with premature rupturing of the membranes, we can screen for this bacteria early in pregnancy. We then might be able to treat affected women with antibiotics and reduce their risk for PPROM. Our research is several steps away from this, but it gives us opportunities to explore potential targeted therapeutic interventions, which we lack in obstetrics.”

More research still needs to be conducted on the link between bacteria and premature birth.

Bacteria ‘Could Be a Cause of Preterm Births’: http://www.medicalnewstoday.com/articles/271037.php
Bacteria Linked to Water Breaking Prematurely During Pregnancy: http://corporate.dukemedicine.org/news_and_publications/news_office/news/bacteria-linked-to-water-breaking-prematurely-during-pregnancy
Bacteria Localization and Chorion Thinning among Preterm Premature Rupture of Membranes: http://www.plosone.org/article/info%3Adoi%2F10.1371%2Fjournal.pone.0083338