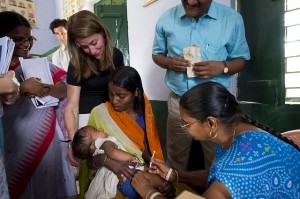 Despite the ongoing fear among some parents that vaccines — specifically the measles, mumps, and rubella (MMR) vaccine — cause autism, a new systematic review published in Pediatrics, the official journal of the American Academy of Pediatrics concludes that there is “strong evidence that MMR vaccine is not associated with autism.” The review additionally concluded that, despite that vaccines can cause serious adverse events (side effects), serious side effects are “extremely rare and must be weighed against the protective benefits that vaccines provide.”

The sweeping review examined 20,478 titles from data sources such as PubMed, Advisory Committee on Immunization Practices statements, package inserts, existing reviews, manufacturer information packets, and the 2011 Institute of Medicine consensus report on vaccine safety. Of 20,478 titles identified, the researchers included 67 in the review. The researchers included only studies that used active surveillance and had a control mechanism.

However, despite the association of serious adverse events with some vaccines, the researchers also found that such side effects are extremely rare.

Comments Dr. Carrie Byington, Department of Pediatrics at the University of Utah, in an editorial accompanying the review, these findings “should be reassuring to parents of young children and to the clinicians who care for them.”

Adds pediatrician Courtney Gidengil of Rand and Boston Children’s Hospital, co-author of the study, “This report should give parents some reassurance.”

As with any medical procedure, vaccines do carry some risks. However, the most common side effects of vaccines include minor events such as low-grade fever and diarrhea. More serious adverse events occur in less than 1% of all individuals receiving vaccines.

As stated in the editorial:

“Fortunately, the adverse events identified by the authors were rare, and in most cases, would be expected to resolve completely after the acute event. This contrasts starkly with the natural infections that vaccines are designed to prevent, which may reduce the quality of life through permanent morbidities, such as blindness, deafness, developmental delay, epilepsy, or paralysis and may also result in death.”

In other words, vaccines do pose some risks. However, the risks are generally minor, and serious side effects are extremely rare. Thus, the protective benefits of vaccines far outweigh the risks and also outweigh the benefits and risks of infection via wild forms of the diseases.

For example, as Paul Offit, chief of infectious disease at Children’s Hospital of Philadelphia and a developer of the RotaTeq vaccine, explains, although the rotavirus vaccine can cause an additional one to five cases of intussusception for every 100,000 doses of the vaccine administered, rotavirus infection can also cause intussusception. Additionally, since the introduction of the rotavirus vaccines, rates of this serious complication have decreased.

The review should reassure parents that vaccines are safe.

Unfortunately, as blogger Charlie Brooks explores, anti-vaccine groups will continue to dismiss the overwhelming evidence confirming the safety and efficacy of vaccines:

“The basic problem is that everybody is effectively speaking two languages on this matter. Arguing facts and pointing to the overwhelming evidence of 20,000 different scientific papers means nothing when the other side rejects the very basis of fact. It could be 20,000,000 different papers, and it still wouldn’t convince folks on the other side because the anti-vaccine crowd automatically tosses out any evidence against their point of view. The thousands of studies done all across the world that point to an indisputable fact are somehow biased or a part of the largest and most effective conspiracy that mankind has ever seen.”

For parents and health care professionals who support vaccination, the review offers more evidence that vaccines are safe. For individuals on the fence, the sweeping systemic review seeks to establish a degree of transparency about vaccines.