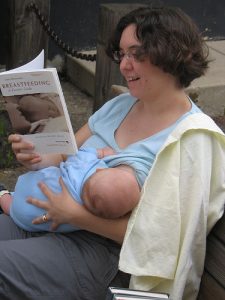 In the short term, breastfeeding decreases the prevalence of infectious diseases and mortality them among infants. But what about long term benefits? According to a new study published in the journal The Lancet Global Health, prolonged breastfeeding during childhood is linked to higher intelligence, longer schooling and greater earnings among adults.

“What is unique about this study is the fact that, in the population we studied, breastfeeding was not more common among highly educated, high-income women, but was evenly distributed by social class.”

For the study, researchers followed 3,493 infants born in Pelotas, Brazil for an average of 30 years, measuring IQs and collecting further information about educational achievement and income. The researchers controlled for factors that can contribute to IQ scores including family income at birth, maternal age, and parental schooling.

“The effect of breastfeeding on brain development and child intelligence is well established, but whether these effects persist into adulthood is less clear.

“Our study provides the first evidence that prolonged breastfeeding not only increases intelligence until at least the age of 30 years but also has an impact both at an individual and societal level by improving educational attainment and earning ability.”

The researchers additionally hypothesize a biological mechanism for the findings:

“The likely mechanism underlying the beneficial effects of breast milk on intelligence is the presence of long-chain saturated fatty acids (DHAs) found in breast milk, which are essential for brain development. Our finding that predominant breastfeeding is positively related to IQ in adulthood also suggests that the amount of milk consumed plays a role.”

The researchers did not measure the characteristics of the home environment of the infants or maternal-infant bonding, noting that previous studies have suggested that breastfeeding improves cognitive functioning even after controlling for home environment and stimulation.

“Our results suggest that breastfeeding not only improves intelligence up to adulthood, but also has an effect at both the individual and societal level, by increasing educational attainment and earning ability.”

Another recent study found that factors such as gestational age, birth method, and breastfeeding influence the development of the immune system and the susceptibility to asthma and allergies. A study from 2013 found that breastfeeding mothers who consume larger amounts of iodine in their diets have smarter babies.

Breastfeeding on a Park Bench: https://www.flickr.com/photos/sheahammond/1075123997/