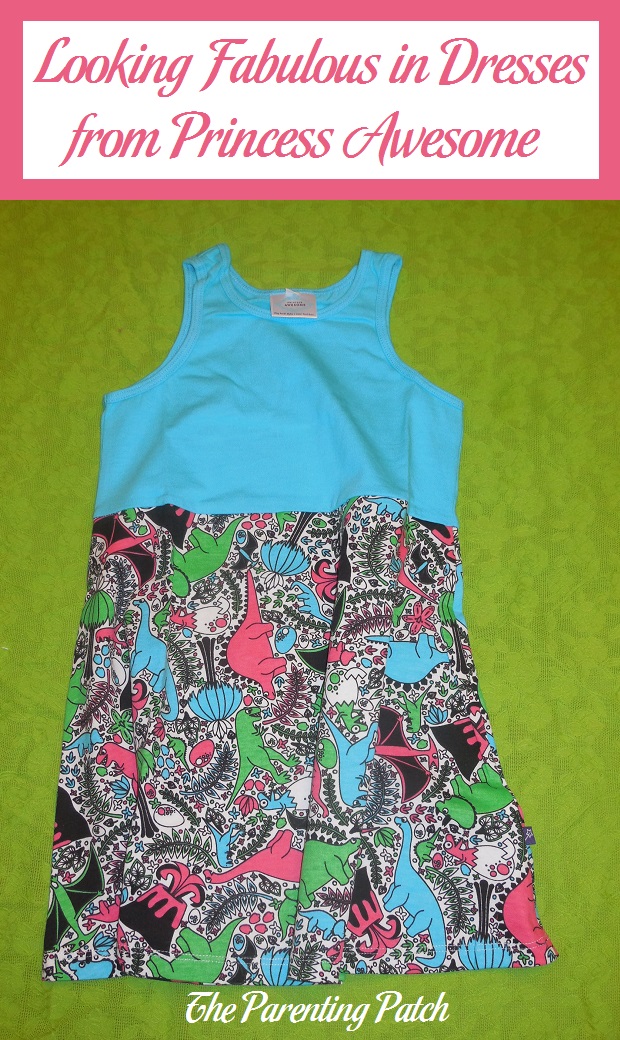 My daughter loves the color pink. But she chose her favorite color on her own. As an infant and toddler, I dressed her in all colors of the rainbow. She likes playing with dolls and My Little Ponies and other “girl” toys. But she also likes trains and dinosaurs and blocks. She also loves learning about science and math during homeschool lessons and particularly loves playing in the sand and mud. When I recently saw an advertisement for Princess Awesome on Facebook, I fell in love with the idea of twirly dresses in non-traditional prints. Why should little girls wear only flowers or butterflies? Little girls can like trains, dinosaurs, and rockets too! I am thus honored to receive a “She-Rex” Dinosaurs Play Dress for my daughter to review in exchange for my honest opinion.

When you walk into the clothing department of a typical store, you are sure to find butterflies and flowers for girls and robots and dinosaurs for boys with nary a crossover between. In the spring of 2013 while buying pajamas for her kids, founder Rebecca noticed the sad state of the thematic divide between clothes for girls and boys. After Rebecca talked with her friend and co-founder Eva, Princess Awesome was born. Princess Awesome believes that, if a girl likes purple and also likes trucks, she should be able to wear a purple truck dress. The company believes that both monsters and twirly skirts are awesome. Founded by mothers, the women at Princess Awesome are committed to making clothes that girls want to wear and that parents want to see on their daughters. 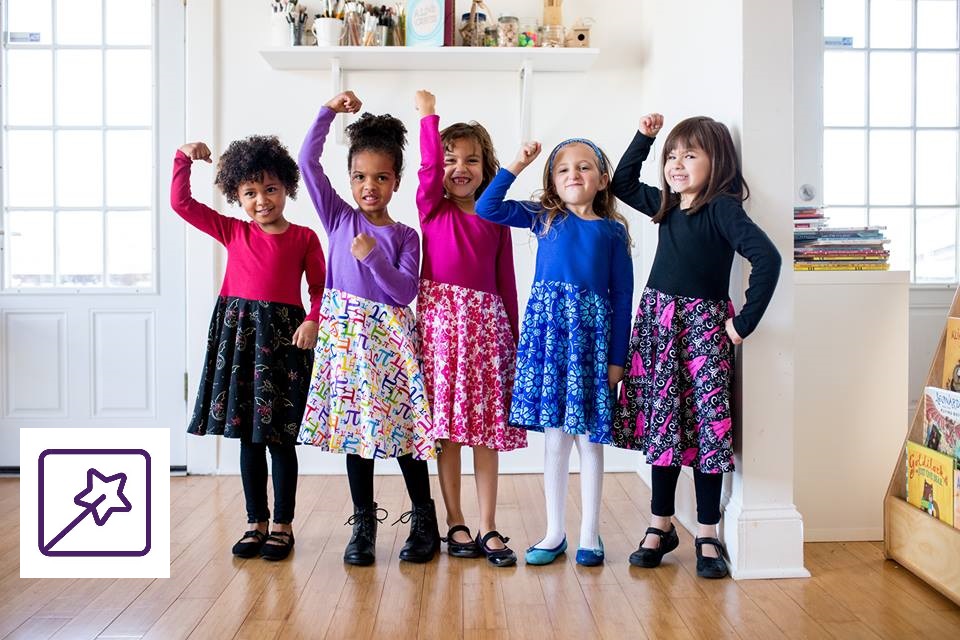 I chose the “She-Rex” Dinosaurs Play Dress in size 5 from Princess Awesome for my kindergartener daughter. The brightly colored sleeveless dress features a blue top with a blue, pink, green, black, and white dinosaur-print bottom. (Some sizes come with black binding around the neck and arm holes.) T-Rex, Stegosaurus, and Triceratops romp around volcanoes, hatching dinosaur eggs, and other prehistoric elements on the 100% cotton play dress.  Made in the USA and currently priced at $39, the “She-Rex” Dinosaurs Play Dress is available in sizes 2T to 12. 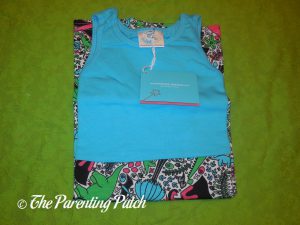 Although my five-year-old daughter has decided that her favorite color is pink, I strive to expose her and her brother to “boy” and “girl” things. From birth, I have dressed both my kids in all colors of the rainbow. My daughter sometimes wears “boy” clothes and my son sometimes wears hand-me-downs from his big sister. I also provide both my children with toys of all kinds to avoid gender-stereotyping either one. My son likes playing with My Little Ponies as much as my daughter likes playing with dinosaurs. She was thus super thrilled to receive her new “She-Rex” Dinosaurs Play Dress from Princess Awesome. My son was also super excited for the dinosaurs. 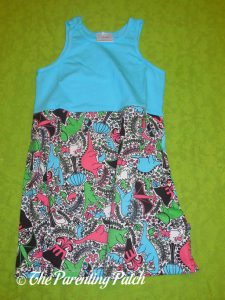 When the dress arrived, I was immediately impressed by the high-quality material and construction. The 100% cotton fabric is thick and comfortable. The sewing is even and secure. The dyes are bright and colorful. The skirt of the dress is absolutely perfect for twirling. Most importantly, the “She-Rex” Dinosaurs Play Dress from Princess Awesome has held up to repeated washings. As an active little girl who loves to get messy making crafts and who loves to run around outside, my daughter gets her clothes dirty. High quality clothing that withstands repeated laundering is a must in my house, and Princess Awesome makes the cut! The price of $39 is a little more than I would usually spend on clothes for my kids, but I chose a slightly bigger size so my daughter can wear the dress longer. 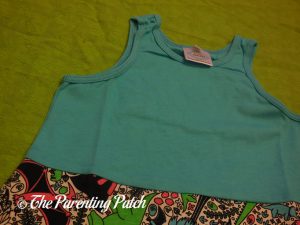 I am most impressed by the fun prints offered by Princess Awesome. I refuse to gender stereotype my kids. If my son wants to wear a pink shirt or even a pink skirt, then he can. The same goes for my daughter. While I could put her in a dinosaur shirt marketed towards boys, she does enjoy wearing dresses. Princess Awesome makes so many fun and unusual prints for little girls. My daughter and I absolutely love the “She-Rex” Dinosaurs Play Dress! I just wish that the company made adult sizes as well. I would totally rock a dinosaur dress along with my daughter. Matching clothes for boys would also be awesome. My kids and I would look adorable all decked out in matching dinosaur, rocket, or science outfits. 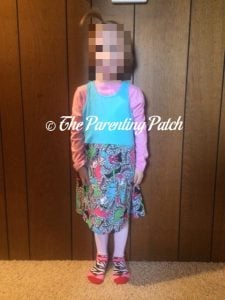 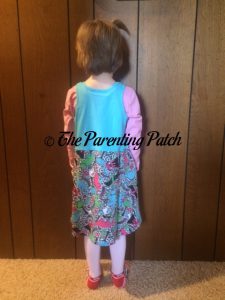 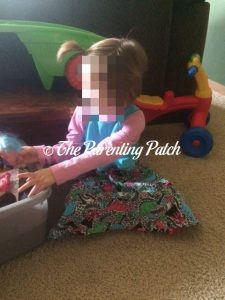 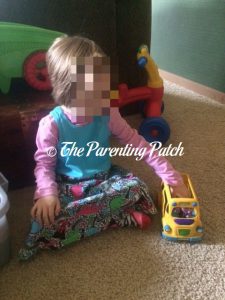 I am super excited that a post for Princess Awesome appeared in my Facebook thread a few weeks ago. My kindergartener daughter received the “She-Rex” Dinosaurs Play Dress in size 5, which features a blue, pink, green, black, and white dinosaur-print skirt and a blue sleeveless top. Founded by mothers, the women at Princess Awesome are committed to making clothes that girls want to wear and that parents want to see on their daughters. I love the high quality materials and designs of the outfit, and my daughter loves her new dinosaur dress. If you are looking for some nonconventional prints for your daughter, I highly recommend Princess Awesome!