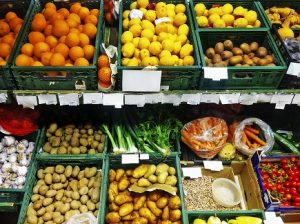 The diet that a woman consumes during pregnancy can significantly affect her risk of giving birth prematurely, suggests a new study published in the journal BMJ. Pregnant women who consume a diet rich in vegetables, fruits, and whole grains and who drink water and women who consume a “traditional” diet of boiled potatoes, fish, and cooked vegetables both have a significantly reduced risk of premature birth.

Giving birth before 37 weeks of pregnancy is associated with a number of short-term and long-term health complications for babies. Premature birth also accounts for almost 75 percent of neonatal deaths.

Previous research has suggested that maternal diet can directly affect an unborn child. For the present study, researchers from Sweden, Norway, and Iceland sought to examine whether an association exists between maternal dietary patterns and risk of preterm delivery.

The researchers analyzed data from preterm births among 66,000 women between 2002 and 2008 obtained from the from the Norwegian Mother and Child Cohort Study. Women included in the study were free of diabetes, delivered a live single baby, and completed a validated food frequency questionnaire on dietary habits during the first four to five months of pregnancy.

After adjusting for compounding factors, the researchers discovered that prudent diets are associated with a significantly reduced risk of preterm delivery as well as spontaneous and late preterm delivery. A traditional diet also decreased the risk of premature birth.

In other words, a maternal diet high in fruits, vegetables, whole grains, and water can lower the risk of giving birth prematurely.

“The authors build on several studies that have proposed the benefit of a diet rich in fruit and/or vegetables in prevention of premature birth, including a recent report in this journal showing that fruit intake before pregnancy is a factor that relates to healthy outcome in nulliparous pregnant women. Health professionals would therefore be well advised to reinforce the message that pregnant women eat a healthy diet.”

Fruits and Vegetables at Market: http://www.freeimages.com/photo/1442681