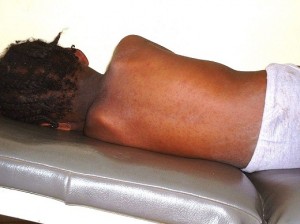 Between January 1 and May 23, the number of confirmed measles cases has risen to 288, the highest number in a single year since the contagious disease was eliminated from the country in 2000, announces the Centers for Disease Control and Prevention (CDC). And the year is not even half over.

Measles, or rubeola, is a highly contagious respiratory disease caused by a virus that results in fever, runny nose, cough, and a rash all over the body. Complications from the measles include ear infections, pneumonia, encephalitis, brain damage, deafness, and death.

The only effective prevention against the measles is the measles (MMR) vaccine. Prior to the introduction of the vaccine in 1963, between three and four million Americans became infected with the disease each year. Each year, 400 to 500 individuals died, 48,000 were hospitalized, and 1,000 developed chronic disability from measles.

The current 288 measles cases is the largest number of cases that the country reported in the first five months of a year since 1994. Comments Anne Schuchat, assistant surgeon general with the U.S. Public Health Service and director for the National Center for Immunization and Respiratory Diseases, “We don’t want to break the record of 1994.”

Measles is no longer native to the United States because of the measles vaccine. Most of the current cases have occurred as travelers have brought the disease back into the country from other infected areas such as the Philippines, which is currently experiencing a measles outbreak.

Of the current measles cases this year, 85% have occurred in unvaccinated individuals. Over half of the infected individuals are also over the age of 20, many adults whose parents refused to vaccinate years ago.

States Dr. Schuchat, “We often think of measles as a childhood disease; today’s report reminds us adults can get it, too.”

Additionally, forty-three of the total patients diagnosed with the measles have been hospitalized, most with pneumonia. No deaths have been reported yet.

The majority of measles outbreaks occur in communities with lower vaccination rates. States the CDC in a news release, “Ninety percent of all measles cases in the United States were in people who were not vaccinated or whose vaccination status was unknown.”

Adds Dr. Schuchat, “Clusters of people with like-minded beliefs (against vaccinations) can be susceptible to outbreaks when the disease is imported, and it’s one of the most contagious diseases.”

The combination measles-mumps-rubella (MMR) vaccine is the only effective means of preventing the measles. The first MMR vaccine is administered at age 1, meaning infants under 12 months old are at increased risk for measles infection. The only individuals who should not receive the MMR vaccine are individuals who are immune-compromised and pregnant women because the vaccine contains a live virus.