In an update on a report from May, the Centers for Disease Control and Prevention (CDC) recently announced a record number of cases of measles in the United States of America. Between January 1 and August 29 of this year, the National Center for Immunization and Respiratory Diseases (NCIRD) at the CDC has confirmed 592 measles cases. 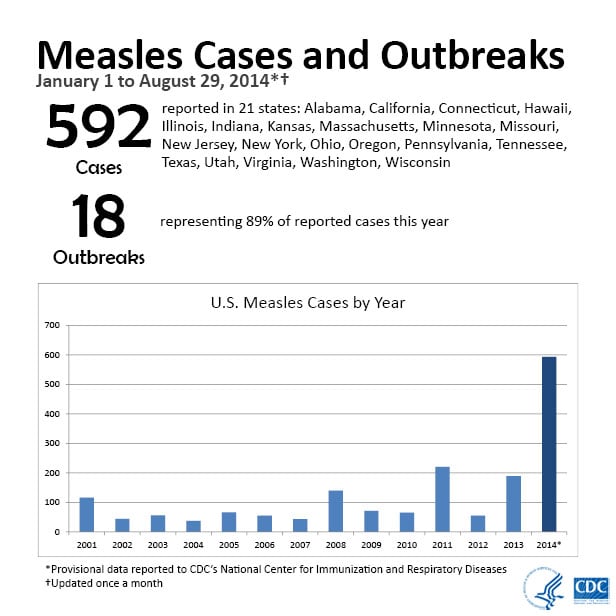 The current number of 592 represents the highest number of measles cases since the documentation of measles elimination in 2000. The significant increase is largely the result of the increasing trend of vaccination refusal.

States Dr. Anne Schuchat, an assistant surgeon general and director of the National Center for Immunization and Respiratory Diseases at the CDC, in a press release:

“The current increase in measles cases is being driven by unvaccinated people, primarily U.S. residents, who got measles in other countries, brought the virus back to the United States and spread to others in communities where many people are not vaccinated. Many of the clusters in the U.S. began following travel to the Philippines where a large outbreak has been occurring since October 2013.”

Although vaccination efforts almost entirely eliminated the measles in the United States by 2000, the disease is still prevalent in many parts of the world including some countries in Europe, Asia, the Pacific, and Africa. The majority of confirmed measles cases in the United States have occurred among unvaccinated individuals. International travel easily brings the disease into the country.

Once the measles reaches a group of unvaccinated individuals, the disease spreads rapidly.

The increasing trend of vaccination refusal in the United States has attributed to a significant decrease in herd immunity, evidenced by the twenty-year spike in measles cases.

The only effective prevention against the measles is the measles (MMR) vaccine. Prior to the introduction of the vaccine in 1963, between three and four million Americans became infected with the disease each year. Each year, 400 to 500 individuals died, 48,000 were hospitalized, and 1,000 developed chronic disability from the measles.

Measles, or rubeola, is a highly contagious respiratory disease caused by a virus that results in fever, runny nose, cough, and a rash all over the body. Complications from the measles include ear infections, pneumonia, encephalitis, brain damage, deafness, and death. An estimated 20 million people worldwide still contract the measles, and 122,000 individuals die from the preventable disease each year.

The current spike in measles cases highlights the importance of the measles vaccine.