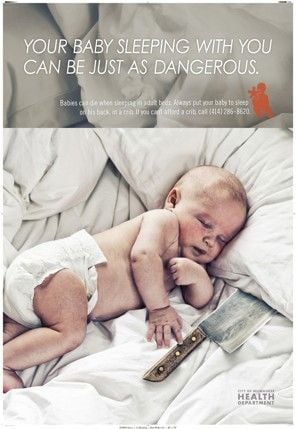 A recent campaign launched by the Milwaukee Health Department aims to warn parents about the dangers of co-sleeping. In one ad (featured above), a baby is shown sleeping next to a meat cleaver with the message “YOUR BABY SLEEPING WITH YOU CAN BE JUST AS DANGEROUS.”

The “horror” campaign as it is being called by shocked parents is being endorsed by city officials who believe parents take the practice too lightly. Speaking about the campaign, city Health Commissioner Bevan Baker told the Milwaukee Journal Sentinel:

“Is it shocking?…Yes, but what is even more shocking is that 30 developed and underdeveloped countries have better infant death rates than Milwaukee.”

In speaking about the importance of the campaign, officials are quick to point out that a 7-week-old baby died because of co-sleeping on the same day that the campaign was launched.

In the meantime, critics of the campaign point out that co-sleeping is a natural practice throughout much of the world including countries with lower infant death rates than the United States. According to some critics, the practice is generally viewed as safe if the parents are not drunk or on drugs.

In their response to the campaign, the  Washington Post points to baby expert William Sears who offers parents advice about safe co-sleep, advice that the paper says does not mention butcher knives.

Ad campaign unveiled as another co-sleeping death is announced: http://www.jsonline.com/news/milwaukee/ad-campaign-unveiled-as-another-cosleeping-death-is-announced-s030073-133552808.html