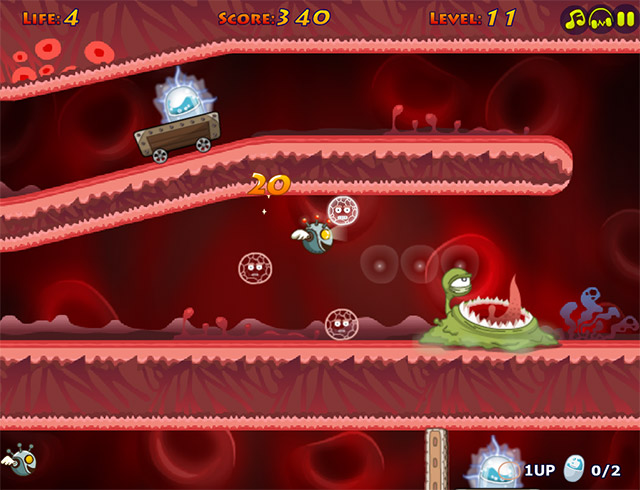 Several years ago, a group of medical researchers and doctors teamed up to develop a video game that helped patients understand how cancer treatments they were given were fighting cancer. Thanks to the popularity of that game, a sequel has been launched for mobile devices.

Doctors hope the game will encourage kids to understand what is going on when they are treated with chemotherapy and other popular cancer treatments.

Re-Mission 2 is actually six free online games that have been wrapped inside a single web browser or Apple iPad app. Each of the games share a common goal of fighting cancer. Patients are armed with a battalion of cancer fighting weapons including chemo, radiation, targeted cancer drugs, and more.

The original Re-Mission was created by HopeLab, a nonprofit founded by Pamela Omidyar, the wife of eBay founder Pierre Omidyar.

While many kids might be scared when it comes to cancer, they are probably willing to play “Stem Cell Defender” in which they must protect white blood cells from an invading army of bacteria.

HopeLabs isn’t just trying to bring joy to children; they claim that, once kids realize how important their treatment is in their defense and offense against cancer, they are more likely to stick to their important cancer fighting regime.

HopeLabs isn’t just an organization that makes games; they actually have a Stanford University study that backs up the game play method in children. The Standford study found that kids who played Re-Mission experienced more activity in neural circuits associated with incentive motivation when compared to those who simply observed game play. Researchers believe that such increases in motivation may boost a player’s adherence to prescribed chemotherapy and antibiotic treatments to fight infection.

Another August 2008 study published in the journal Pediatrics also determined that encouraging patients through video games could lead to more active regime following.

While your child might not know what chemotherapy is, you can bet they have played Fruit Ninja or Angry Birds, and, for that reason, the app might be just the tool you need for them to understand what their bodies are up against.

The Re-Mission 2 game set is free to download, so why not bring a bit of joy to your child during a hard time. If it works, it works. If it doesn’t work, your kid at least has a few moments of happy game playing to take their mind off their cancer treatment.