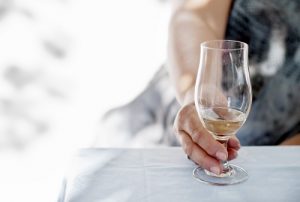 Although alcohol abuse decrease the response of the immune system to booster vaccination, moderate alcohol consumption may increase the response to booster shots, says a new study led by Ilhem Messaoudi — an associate professor at the School of Medicine at the University of California, Riverside — and published in the journal Vaccine.

The researchers started by training 12 rhesus macaques monkeys to consume alcohol freely. The monkeys were then vaccinated against smallpox. One group of monkeys was then allowed access to alcohol and the other group to sugar water. Both groups were given access to normal water and food. The monkeys were again vaccinated seven months into the experiment. The researchers monitored the monkeys for a total of 14 months.

Prior to free access to alcohol, all the monkeys exhibited similar immune responses to vaccination. However, after access to either alcohol or sugar water, the monkeys responded vastly differently.

Commenting on the results of the study, Professor Messaoudi states:

“These surprising findings indicate that some of the beneficial effects of moderate amounts of alcohol consumption may be manifested through boosting the body’s immune system.

“This supports what has been widely believed for some time: moderate ethanol consumption results in a reduction in all causes of mortality, especially cardiovascular disease. As for excessive alcohol consumption, our study shows that it has a significant negative impact on health.”

In other words, heavy alcohol consumption negatively affects the response of the immune system to vaccines. However, moderate consumption appears to boost vaccine response.

The researchers do caution that individuals with a history of alcohol abuse should not begin drinking moderately based on the results of these findings. However, for the average individual who consumes one drink per day for women and up to two drinks per day for men, moderate alcohol consumption may improve health including immune responses.

Note: Only adults of legal drinking age should consume alcohol.

Can a Glass of Wine a Day Keep the Doctor Away?: http://ucrtoday.ucr.edu/19625
Moderate Alcohol Consumption ‘Boosts Immune System’: http://www.medicalnewstoday.com/articles/270379.php