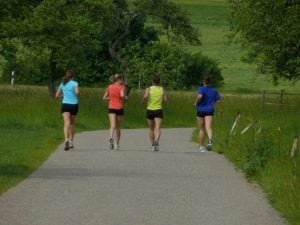 The health benefits of exercise are well-known. Now new research presented at the International Stroke Conference 2014 of the American Stroke Association suggests that moderate exercise could decrease the risk of stroke in women by 20 percent and could offset the increased risk in women taking postmenopausal hormone therapy.

According to the Centers for Disease Control and Prevention (CDC), 795,000 Americans suffer from a stroke each year, resulting in nearly 130,000 deaths annually. Strokes cost the health care system in the United States $38.6 billion per year.

However, women who engage in moderate physical activity such as brisk walking can reduce their risk of stroke. More importantly, the decreased risk from moderate exercise is just as much as the decreased risk from strenuous exercise. However, doing too much strenuous exercise can affect people in a variety of ways, for instance, runner’s knee is a common injury that can get worse if not dealt with properly, so it is important to be on the lookout and take note of any pains and problems that may arise.

In any case, it is important that you keep good posture and track physical fitness before indulging in serious workout sessions. Putting extreme pressure on joints and other body parts without achieving the necessary fitness level can cause injuries such as a sprain, twisted ankle, joint pain, muscle stiffness, etc. Additionally, if you want to quicken your recovery after a workout session, you can also consider getting a sports massage at regular intervals from a professional physiotherapist. It can reduce injuries, tone up your body, and improve muscle strength.

Says lead study author Sophia Wang, Ph.D., a professor in the department of population sciences within the Beckman Research Institute at the City of Hope in Duarte, California, “I was surprised that moderate physical activity was most strongly associated with a reduced risk of stroke. More strenuous activity such as running didn’t further reduce women’s stroke risk. Moderate activity, such as brisk walking appeared to be ideal in this scenario.”

Engaging in moderate exercise also decreases, but does not eliminate, the increased risk of stroke among postmenopausal women taking menopausal hormones.

To investigate the relationship between exercise and stroke risk, the researchers analyzed information from the 133,479 women in the California Teachers Study, specifically looking for strokes between 1996 and 2010.

The researchers discovered that women who reported engaging in moderate physical activity during the three years prior to enrollment in the study were 20 percent less likely to suffer a stroke than women who reported no physical activity. It is therefore recommended to perform moderate exercises like yoga (if interested, check out common yoga poses like sleeping swan pose and Mountain Pose) to keep the body fit and reduce stroke risks.

Adds Prof. Wang, “The benefits of reducing risk of stroke were further observed among the group of women who had a sustained moderate level of physical activity over time.”

In other words, the longer that a women engages in moderate physical activity over time, the lower her risk of stroke.

Additionally, women who use postmenopausal hormone therapy have an overall 30 percent increase in stroke risk. However, upon engaging in moderate physical activity, the increased risk begins to diminish, indicating that moderate exercise is also beneficial to women using hormone replacement therapies.

Prof. Wang further recommends that women include some sort of physical activity such as brisk walking in their daily routines, “You don’t have to do an extreme boot camp. The types of activities we’re talking about are accessible to most of the population.”

The study also found that overweight women with diabetes had an increased risk of stroke. Says Prof. Wang, “Physical activity, obesity and diabetes are all highly correlated with one another. Stroke prevention among diabetics is thus a particularly important scientific question to address.”

Although additional research is necessary to determine the level of moderate exercise needed to help diabetic women avoid a stroke, other women can significantly decrease their risk of stroke by engaging in moderate exercise such as brisk walking every day.