Connect
To Top
NewsMay 9, 2013 This post may contain affiliate links 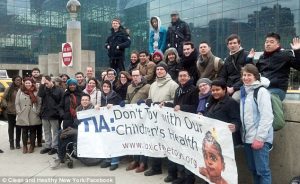 Toy retailers and manufacturers beware: The health advocacy group known as Moms for a Non-Toxic New York is preparing to go after your companies for spreading toxic items to children.

The group recently announced plans to launch a campaign against popular destinations including Buy Buy Baby and Babies”R”Us.

The women are worried, and rightfully so, about various products used to manufacturer plastic toys. Those products include bisphenol A (BPA) and various phthlates, which have been linked to cancer, fertility issues, and even neurological problems.

Phthlates, BPA, and other toxic materials used in children’s toys has become such a big problem that, in 2007, then California governor Arnold Schwarzenegger signed a state law which prohibited the sale of baby and children’s products containing phthlates. Since the California ban, other states and cities have created their own enforced toxic toy bans.

“Most parents assume they are safe because they hear about regulation all the time . . . [But] it’s almost impossible to walk into a store and know whether a product is safe or not.”

Wilding explains that more than 80,000 chemicals are available for manufacturing toys, and, when one substance is banned, another is often quickly substituted.

Many parents are now seeking out organic toys. Those toys are made with non-toxic, organic materials that are safer for kids and the environment.

BPA is most often used to create strong items like baby bottles and sippy cups, items that include food and drink products that are meant to be ingested. Phthlates, on the other hand, are added to make toys more flexible.

The Centers for Disease Control and Prevention (CDC) notes that 93 percent of adults are believed to have BPA in their systems.

Other toxins are also being investigated including flame-retardant baby and children’s products, which, according to a 2012 study by the Center for Environmental Health (CEH), included a known cancer-causing agent.

From baby toys and clothing to changing pads and car seats, it appears that the Moms for a Non-Toxic New York have a long road ahead of themselves.