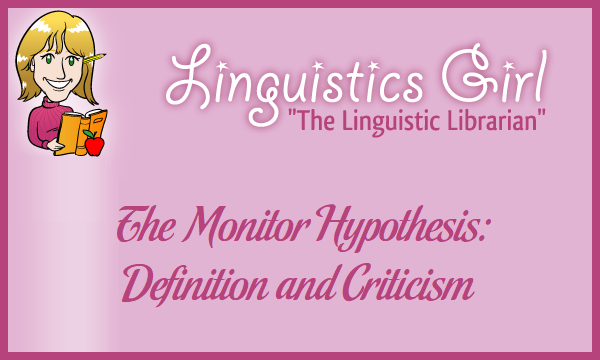 However, despite the popularity and influence of the Monitor Model, the five hypotheses are not without criticism. The following sections offer a description of the third hypothesis of the theory, the monitor hypothesis, as well as the major criticism by other linguistics and educators surrounding the hypothesis.

Definition of the Monitor Hypothesis

The third hypothesis, the monitor hypothesis, complements the acquisition-learning hypothesis by claiming that the only function of learning within second language acquisition is as an editor, or Monitor, for language use produced by the acquired system as well as to produce grammatical forms not yet acquired. The Monitor allows a language user to alter the form of an utterance either prior to production by consciously applying learned rules or after production via self-correction. In other words, the learned system monitors the output of the acquired system.

However, according to the monitor hypothesis, explicit knowledge of a language rule is not sufficient for the utilization of the Monitor; a language user must also have an adequate amount of time to consciously think about and apply learned rules. Additionally, the three conditions required by the Monitor—time, focus, and knowledge—are, as Krashen asserts, “necessary and not sufficient,” meaning that, despite the convenement of all three conditions, a language user may not utilize the Monitor.

Criticism of the Monitor Hypothesis

The major critique of the monitor hypothesis expands on the critique of the acquisition-learning hypothesis. According to the monitor hypothesis, the main purpose of language learning is to function as a Monitor for output produced by acquired system. However, as critics reveal through deeper investigation of the acquisition-learning distinction, to separate language learning clearly and adequately from language acquisition is impossible. Consequently, determining that the function of the learned system is as a Monitor only remains likewise impossible to prove.

Additionally, that the claim of learning-as-Monitor applies only to output after production invites further criticism of the hypothesis; second language learners can and do use the learned system to produce output as well as to facilitate comprehension. Such questions and evidence, therefore, invalidate the central claim of the monitor hypothesis.

Therefore, in spite of the influence of the Monitor Model in the field of second language acquisition, the third hypothesis, the monitor hypothesis, has not been without criticism as evidenced by the critiques offered by other linguists and educators in the field.