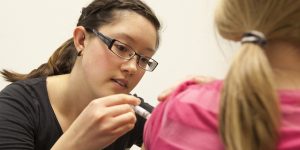 The Centers for Disease Control and Prevention (CDC) currently recommends fourteen vaccines for children between birth and age 6, with different vaccines recommended at specific ages in order to boost the effectiveness of the vaccination. However, despite concerns about increased susceptibility to vaccine-preventable diseases, most health care providers succumb to parental pressure for delayed vaccination schedules, says a new study in the journal Pediatrics.

Not vaccinating — both on time or at all — increases the risk that diseases such as measles and pertussis (whooping cough) will make a resurgence in the United States. Unvaccinated and undervaccinated individuals are more likely to contract and spread vaccine-preventable illnesses. Recent outbreaks of both measles and whooping cough illustrate the danger.

For the present study, researchers including Dr. Alison Kempe, professor of pediatrics and director of the Adult and Child Center for Health Outcomes Research and Delivery Science (ACCORDS) at the University of Colorado School of Medicine and Children’s Hospital Colorado sought to assess the frequency of requests to spread out recommended vaccines for children under age 2, physician attitudes regarding such requests, and strategies used and perceived effectiveness in response to such requests.

The researchers sent surveys via email and mail to a nationally representative sample of 815 pediatricians and family doctors between June and October 2012.

Of the 534 pediatricians and family doctors who responded to the survey, 93 percent indicated receiving requests from parents to spread out recommended vaccinations for their children, and 21 percent had received requests from more than 10 percent of parents.

The respondents indicate that parents frequently cite concerns that vaccines cause autism (a disproven hypothesis) and the belief that children are unlikely to contract a vaccine-preventable disease as common reasons for requesting delayed vaccination schedules.

However, despite concerns, the majority of health care providers “often/always” or “sometimes” agree to delayed vaccination schedules. Eighty-two percent of respondents believe that agreeing to parental requests for delayed vaccination schedules helps build trust with families, and 80 percent believe that families might leave the medical practice if health care providers refuse such requests.

Additionally, although the majority of health care providers reported using a variety of strategies to encourage parents to adhere to the recommended vaccination schedule for children, most consider the strategies ineffective.

The researchers believe that the findings of the study raise some concerns, stating the need for evidence-based interventions to increase timely vaccination. Interventions that educate parents about the safety and effectiveness of vaccines need to begin in early pregnancy. The researchers additionally encourage increased use of social networks and public messaging to help parents to make informed decisions about childhood vaccinations.

Another recent study found that text messages containing educational information about the need for second dose of the vaccine for children receiving the flu shot for the first time improved the timely delivery of a second dose of influenza vaccine compared to conventional text messages and written reminders.

Most Doctors Succumb to Parents’ Requests to Delay Vaccinations, Despite Concerns: http://www.medicalnewstoday.com/articles/290178.php
Physician Response to Parental Requests to Spread Out the Recommended Vaccine Schedule: http://pediatrics.aappublications.org/content/early/2015/02/24/peds.2014-3474.abstract?sid=837c5a25-54b8-416c-a69f-ea441eecfef6