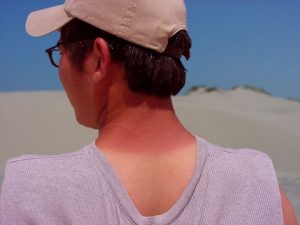 Experiencing five or more blistering sunburns before the age of 20 increases the risk of melanoma by up to 80 percent, reports a new study published in the journal Cancer Epidemiology, Biomarkers, & Prevention (CEBP).

Funded by the National Institutes of Health and the Brigham and Women’s Hospital in Boston, Massachusetts, the present study used twenty years of collected data from the Nurses’ Health Study II, which targeted female nurses between the ages of 25 and 42 years old across fourteen states in 1989. The study collected data on a cohort of 108,916 American women.

Comments Dr. Abrar A. Qureshi, professor and chair of the Department of Dermatology at Warren Alpert Medical School of the Brown University and Rhode Island Hospital, both in Providence, Rhode Island:

“Pattern of sun exposure was not uniformly associated with the risk for all the three main skin cancers we see in the United States, suggesting that there are some differences in the pathophysiology of these skin cancers.”

“Our results suggest that sun exposures in both early life and adulthood were predictive of non-melanoma skin cancers, whereas melanoma risk was predominantly associated with sun exposure in early life in a cohort of young women.”

The results of the present study indicate that sun safety during childhood and before the age of 20 is essential for reducing the risk of skin cancer including melanoma.

“Parents may need to be advised to pay more attention to protection from early-life sun exposure for their kids in order to reduce the likelihood of developing melanoma as they grow up. Older individuals should also be cautious with their sun exposure because cumulative sun exposure increases skin cancer risk as well.”

Skin cancer is currently the most common cancer in the United States. Although melanoma accounts for only two percent of all skin cancer cases, melanoma is more aggressive than other skin cancers and accounts for more than 9,700 of the nearly 13,000 skin cancer deaths each year.