Connect
To Top
NewsFebruary 4, 2015 This post may contain affiliate links 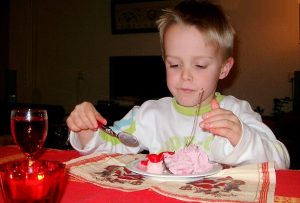 The picky eater makes many parents dread mealtimes. Although no scientific definition of picky eating exists, a new study from the University of Illinois published in the Journal of Sensory Studies defines four categories of picky eating through definable preferences and mealtime behaviors and demonstrates that parents define and experience picky eating differently.

Explains Sharon Donovan, a professor of nutrition at the university, about the importance of the study, “If we better understand the behaviors that parents associate with picky eating, we can develop specific recommendations targeted at those behaviors. Not all picky eaters are created equal.”

To investigate behaviors and food preferences of children perceived by parents as picky eaters, the researchers used an in-home meal study was completed to investigate differences between picky eaters and non-picky eaters using real-time parental observations. A total of 170 children between the ages of 2 and 4 participated in the study, with 83 described by parents as picky eaters and 87 as not. The parents and children evaluated five standardized meals in-home, with the parents recording responses to the meals including the behavior and consumption of the child at each meal in real time.

The study showed that children considered picky eaters by parents reacted differently to common foods and behaved differently at mealtimes compared with children considered non-picky eaters. The differences were significant and occurred across sixteen assessed behaviors. Behaviors of the picky eaters to the meals consisted of behaviors ranging from simple suspicion of an unfamiliar food to cringing, crying, and gagging.

Comments Soo-Yeun Lee, a sensory scientist at the University of Illinois:

“Non-picky eaters on average were perceived by their parents to have consumed more of the meal and had higher acceptance scores for most of the foods evaluated. They also displayed significantly fewer negative behaviors — they were more ‘willing to come to the table to eat’ and ‘participate in mealtime conversation’.”

According to the study, picky eaters fall into four groups: (1) Sensory-Dependent Eaters, who reject a food because of taste or texture; (2) Behavioral Responders, who cringe or gag when food is not prepared in the “right” way or who refuse to come to the table at mealtime; (3) Preferential Eaters, who refuse to try new foods and avoid foods that are mixed or have complex ingredients; and (4) General Perfectionists (by far the largest group), who have very specific needs, little variety in their diet, and may insist that foods not touch each other.

The researchers also argue that parental response can influence picky eating habits. Says Donovan, “A parent’s response to pickiness can determine how bad the behavior will be and how long it will persist. Don’t let every meal become a battle.”

“Requiring kids to eat their broccoli before they can have dessert may simply give the child negative feelings about broccoli in the long run. The child then regards broccoli as something he has to get through to get a reward.”

Because food preferences are established early in life, parents should expose children to “different flavors, textures, and food groups was linked to better acceptance of those foods.” Some tips for introducing new foods to picky eaters include serving the new food with another food that the child likes and disassembling combined foods like sandwiches and casseroles to reveal all the ingredients.

Repeatedly offering a rejected food over time can also help. Explains Donovan, “Some parents give up on a food if their child rejects it two or three times, but we encourage parents to keep exposing the child to the food,” adding, “Don’t pressure them to eat it but show them that parents and siblings are eating the food and enjoying it.”

“There’s a continuum here, and one parent may deem a certain behavior picky while another parent would not. When you slot your child into a negative category, the way you approach that issue is so different than if you accept the behavior as part of the child’s normal development.”

Concludes Donovan, “In the meantime, trust your child’s ability to eat what and how much they need. The best thing parents can do is be gatekeepers over what food comes into the house, then let the child decide what she is going to consume, and allow for the occasional treat.”