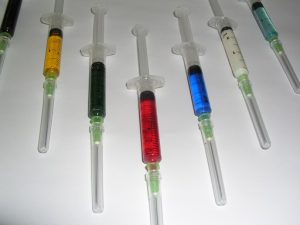 Although using killed or weakened viruses works effectively for many vaccines, the method does not work for all diseases. Now researchers from the Massachusetts Institute of Technology have created a method that delivers the vaccine directly to the lymph nodes in the body.

Lymph nodes are oval-shaped organs of the lymphatic system that are distributed widely throughout the body including the armpits and stomach. Large numbers of immune cells including B, T, and other immunity cells as well as white blood cells called lymphocytes and macrophages reside in the lymph nodes. The lymphocytes in the lymph nodes create the antibodies that protect against disease.

Delivering vaccines directly to the lymph nodes can better stimulate the immune system.

Explains senior author Darrell Irvine, a professor of biological engineering and of materials science and engineering, “The lymph nodes are where all the action happens in a primary immune response. T cells and B cells reside there, and that’s where you need to get the vaccine to get an immune response. The more material you can get there, the better.”

Many vaccines such as the influenza, polio, and measles vaccines consist of killed or weakened forms of the viruses against which the vaccines protect. However, this method is either ineffective or too risky for certain other diseases.

Another vaccine method uses small fragments of proteins produced by a disease-causing virus or bacterium. These subunit vaccines, which consist of protein or sugar fragments, have been effective against hepatitis and diphtheria. Although effective for some diseases, this method also does not work with certain diseases.

The new vaccine method developed at MIT involves vaccines hitching a ride to the lymph nodes by latching on to the protein albumin, which is found in the bloodstream.

The researchers based the new vaccine method off of surgical technique known as “sentinel lymph node mapping.” The technique involves using a tightly binding an imaging dye on the albumin. The dye then builds up in the lymph nodes.

Explains Prof. Irvine, “We realized that might be an approach that you could try to copy in a vaccine – design a vaccine molecule that binds to albumin and hitchhikes to the lymph node.”

The researchers created a series of vaccines that targeted certain diseases such as cervical cancer and melanoma and then tested the vaccines on mice. Each vaccine created a large population of memory T cells that were specific to the viral or tumor peptide. One in three T cells in the blood was a “vaccine-specific T cell.”

In addition to protecting against disease, this new vaccine method also provokes fewer negative responses in the body.

Explains Prof. Irvine, “This lymph-node-targeting modification causes pretty much all of the material to get caught in the draining lymph nodes, so that means it’s more potent because it’s getting concentrated in the lymph nodes, and it also makes it more safe because it’s not getting into the systemic circulation.”

Comments Pal Johansen of the University Hospital Zurich, who was not involved in the present study, “It certainly is an interesting approach, and the results are very convincing. Both the effect on the stimulated immune responses and the consequential suppression of tumor growth are results that would suggest further development and clinical testing.”

This new albumin-targeted vaccine method may aid in the development of an HIV vaccine as well as other cancer vaccines.