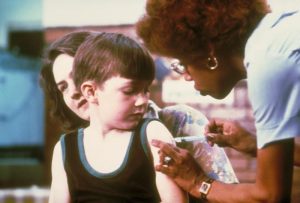 The Centers for Disease Control and Prevention (CDC) currently recommends the first dose of the hepatitis B vaccine at birth with the second and third doses administered between 1 and 2 months and between 6 to 18 months. Now a new study published in the journal PLOS Medicine confirms the efficacy of the vaccine in reducing the risk of liver cancer and other liver diseases in young adults.

Hepatitis B is a serious liver infection that causes lifelong infection, liver cirrhosis, liver cancer, liver failure, and death and which is spread through contact with infected blood and other bodily fluids. Newborn hepatitis B vaccination has been implemented worldwide to prevent hepatitis B virus (HBV) infections. However, until the present study, no research existed on the long-term protective efficacy of the vaccine on primary liver cancer (PLC) and other liver diseases.

For the study, researchers from the Cancer Institute & Hospital at the Chinese Academy of Medical Sciences at the Qidong Liver Cancer Institute in China and the Yale School of Public Health and School of Medicine in the United States used a population-based, cluster randomized, controlled trial between 1985 and 1990 called the Qidong Hepatitis B Intervention Study to examine the efficacy of the newborn hepatitis B vaccine on reducing the risk of liver cancer and other liver diseases in young adults.

The researchers additionally collected data on new cases of liver diseases over 30 years on the remaining participants in the study from a population-based tumor registry.

After comparing vaccination data with liver disease data, the researchers estimated that newborn hepatitis B vaccination reduces the risk of primary liver cancer by 84 percent, death from liver diseases by 70 percent, and of infant fulminant hepatitis by 69 percent.

The researchers also concluded that the efficacy of catch-up vaccination in reducing the risk of liver cancer and other liver diseases was weaker than newborn vaccination (21 percent versus 72 percent).

“Neonatal HBV vaccination was found to significantly decrease HBsAg seroprevalence in childhood through young adulthood and subsequently reduce the risk of PLC and other liver diseases in young adults in rural China. The findings underscore the importance of neonatal HBV vaccination. Our results also suggest that an adolescence booster should be considered in individuals born to HBsAg-positive mothers and who have completed the HBV neonatal vaccination series.”

The most common side effects of the hepatitis B vaccine include minor reactions such as pain and redness at the injection site, headache, fatigue, and a vague feeling of discomfort.

Efficacy of Neonatal HBV Vaccination on Liver Cancer and Other Liver Diseases over 30-Year Follow-up of the Qidong Hepatitis B Intervention Study: A Cluster Randomized Controlled Trial: http://www.plosmedicine.org/article/info%3Adoi%2F10.1371%2Fjournal.pmed.1001774
Hepatitis B Vaccination: http://www.cdc.gov/vaccines/vpd-vac/hepb/
Neonatal HBV Caccination Reduces the Risk of Liver Cancer and Other Liver Diseases in Young Adults in China: http://www.medicalnewstoday.com/releases/287485.php