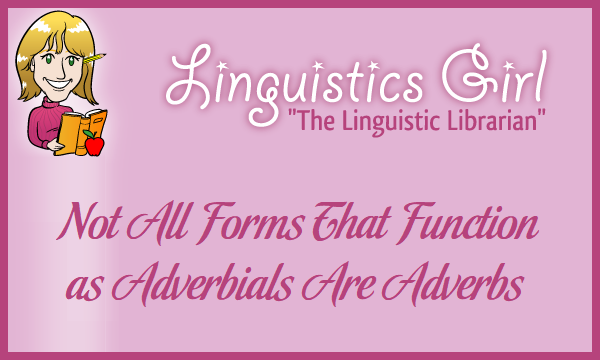 The other day I read a tweet that made some claims about adverbs: “The -s in “unawares,” as in “they were caught unawares,” is completely distinct from the pluralizing -s. It’s an adverb suffix, and it’s also in “always” and “nowadays,” and in “nights,” “weekends,” etc., as in “they work nights/weekends.” #FunWithMorphology”

The -s in "unawares," as in "they were caught unawares," is completely distinct from the pluralizing -s. It's an adverb suffix, and it's also in "always" and "nowadays," and in "nights," "weekends," etc., as in "they work nights/weekends." #FunWithMorphology

The internal structures that distinguish nouns from other grammatical forms are number and possession. Prototypical nouns express grammatical number, which is a grammatical category that expresses count distinctions. English nouns are singular or plural. Singular means one. Plural means not one. Prototypical nouns also express possession, which indicates a possession of or some other relationship to another word or phrase. Syntactic tests reveal that yesterday, today, and tomorrow are nouns because all three have plural and possessive forms. For example:

Notional grammars define the adverb as “words that describe verbs, adjectives, other adverbs, and clauses.” The internal structures that distinguish English adverbs from other English grammatical forms include degrees of modification. Prototypical adverbs such as early, wonkily, and badly have comparative and superlative forms:

Many adverbs, however, lack comparative and superlative forms. In general, adverbs of degree, time, frequency, and place as well as adverbs that function as adverbials do not express degrees of modification. For example:

Are the words nights and weekends in I work nights and weekends nouns or adverbs? Just as with yesterday, today, and tomorrow, one must study both the forms and functions of the words to determine the part of speech. The Merriam-Webster post “The Adverb: A Most Fascinating POS” erroneously claims that nights and weekends are adverbs, pointing out that such words end in <s>. The post states, “There’s something distinctive about that second group: they end in s. In fact, they look like plural nouns being used as adverbs.” The post goes on to claim, “Their historical provenance becomes clearer if you imagine an apostrophe before that s.”

The same tests that identify yesterday, today, and tomorrow as nouns also apply to nights and weekends. Do both words express grammatical number? Yes. One night, two nights, one weekend, two weekends. Can both words express possession? Yes. A good night’s sleep, this weekend’s celebrations. Can both words express degrees of modification? No. *Nighter, *more night, *nightest, *most night, *weekender, *more weekend, *weekendest, *most weekend. (Do not confuse the nominal agent –er suffix with adjectival/adverbial comparative –er suffix.) In form, nights and weekends pass the syntactic tests for nouns but fail the test for adverbs.

Adjunct adverbials are words, phrases, and clauses that modify an entire clause by providing additional information about time, place, manner, condition, purpose, reason, result, and concession. Both adverbs and nouns can function as adjunct adverbials. For example:

Function is not the only consideration in determining the part of speech of a word. One must look at both form and function. And one must not conflate form with function. Words like nights and weekends are nouns. Both are plural forms of the singular night and weekend. Both also have possessive forms: night’s and weekend’s. Neither have comparative or superlative forms, which are the internal structures that help distinguish adverbs from other forms. Furthermore, just because nights and weekends function as adverbials in I work nights and weekends does not make either word an adverb. Nouns can function adverbially in English.