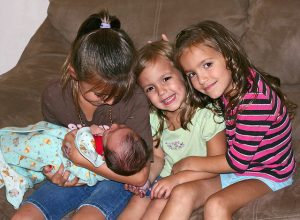 Women who give birth to four or more children are more likely to have cardiovascular changes that can be early indicators of heart disease than women who have fewer children, new research by UT Southwestern Medical Center cardiologists finds.

Cardiologist Dr. Monika Sanghavi, Assistant Professor of Internal Medicine, found that women who give birth to four or more children are more likely to have cardiovascular changes that can be early indicators of heart disease.

“This study adds to a body of evidence that pregnancy, which generally occurs early in a woman’s life, can provide insight into a woman’s future cardiovascular risk,” said Dr. Monika Sanghavi, Assistant Professor of Internal Medicine and lead author of the study.

Using data gathered for the Dallas Heart Study, researchers compared the number of live births reported by women in the study with their coronary artery calcium (CAC) levels and aortic wall thickness (AWT). High levels of coronary artery calcification and thicker aortic walls are markers of heart disease that show up before symptoms develop.

The associations were not affected by adjusting for socioeconomic status or traditional cardiovascular risk factors, suggesting that physiological changes associated with pregnancy may account for the change, Dr. Sanghavi said.

Further studies will be needed to identify the causes, but researchers said one possibility might be that women who have many pregnancies may have more visceral fat (fat around abdominal organs), which has been linked to increased heart disease risk. Another possibility could be that increased cholesterol and higher blood sugar associated with pregnancy may lead to increased risk.

“During pregnancy, a woman’s abdominal size increases, she has higher levels of lipids in her blood, and higher blood sugar levels,” Dr. Sanghavi said. “Each pregnancy increases this exposure.”

The study also found slightly higher rates of high CAC and AWT measurements among women who had one or no children compared with women who gave birth to two or three children, suggesting a U-shaped association between number of births and heart disease, with the lowest risk at two or three births.

“It’s likely that there is a different mechanism for the increased risk at the low end,” Dr. Sanghavi said. “Some of these women could have some underlying disease that prevents them from carrying births to term and increases their risk for heart disease.”

“We are learning that there are numerous physiologic changes during pregnancy that have consequences for future heart health,” said senior author Dr. Amit Khera, Associate Professor of Internal Medicine, who directs the Preventive Cardiology Program and holds the Dallas Heart Ball Chair in Hypertension and Heart Disease. “This study reminds us of the importance of taking a pregnancy history as part of cardiovascular disease screening.”

Researchers in the Division of Cardiology of Internal Medicine and the Department of Obstetrics and Gynecology at UT Southwestern examined data reported for 1,644 women in the Dallas Heart Study, which has collected heart-related data from a sampling of Dallas County residents for more than a decade to help identify social and biological variables contributing to ethnic differences in cardiovascular health. The research appears in the European Journal of Preventive Cardiology.