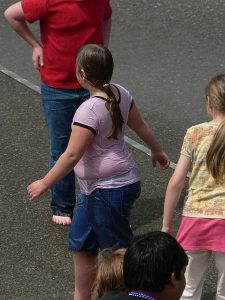 Obesity rates among preschoolers have begun to fall in many states. The decline marks the first time rates have fallen in decades, according to the head of the Centers for Disease Control and Prevention (CDC).

The CDC says it has recorded “small but significant declines” in obesity among low-income preschoolers in 18 states and the U.S. Virgin Islands. According to CDC director Thomas Frieden, rates fell from 2008 to 2011. Frieden notes:

“This is the first report to show many states with declining rates of obesity in our youngest children after literally decades of rising rates.”

The Centers for Disease Control and Prevention posted the numbers in its latest Vital Signs report. The report includes obesity rates from 50 states, the District of Columbia, and two US territories. The report excludes 10 states because the states recently changed how data about obesity among preschoolers and other medical patients is collected.

The CDC is reporting the largest absolute decreases in obesity in Florida, Georgia, Missouri, New Jersey, South Dakota, and the U.S. Virgin Islands. Those areas on average experienced a 1% point drop in preschooler obesity levels.

In Colorado, Pennsylvania, and Tennessee, higher levels of obesity were reported.

The study includes weight and height data for more than 11.6 million children ages 2 to 4. Researchers collected the data from the Pediatric Nutrition Surveillance System.

“Although obesity remains epidemic, the tide has begun to turn for some kids in some states. While the changes are small, for the first time in a generation they are going in the right direction.”

The CDC closely monitors preschooler obesity rates because those children are five time more lightly to be overweight or obese as they move into adulthood.

Researchers admit that the turn-around is surprising because of the rate at which the change is occurring. The report does not expound on what may be turning around preschooler obesity rates.

Here is a CDC provided chart which showcases decreases and increases in obesity prevalence from 2008 to 2011 among low-income preschool-aged children: