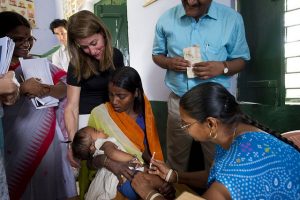 From whom do people most trust information regarding vaccines? Health campaigns run by governmental organizations or online commentary from peers? Two recent experiments published in the Journal of Advertising suggest that online comments influence opinions on vaccination more than official announcements.

For the study investigating from where both pro-vaccination and anti-vaccination individuals obtain information about vaccines, researchers from Washington State University in Pullman conducted two experiments.

The researchers also faked comments from a range of fictional online commenters that reflected a variety of pro- and anti-vaccination viewpoints. The participants were not given any information about the commenter, and gender biases were avoided by giving the commenters unisex names.

As the researchers discovered from the first experiment, participants in the study were “equally persuaded” by the public service announcements and online comments.

Says co-author Ioannis Kareklas, “That kind of blew us away. People were trusting the random online commenters just as much as the [public service announcement] itself.”

In the second experiment, the researchers provided the participants with more details about the fictional commenters. The participants were told that an English literature student, a health care lobbyist, and a doctor specializing in infectious diseases and vaccinology had written the comments.

As predicted, the participants attached most credibility to the comments from the fictional doctor.

The findings of the two experiments offer clues to the continued persistence of the anti-vaccination movement. The study also supports previous research indicating that people take word-of-mouth communications, whether internet-mediated or in person, more seriously than official announcements and advertisements.

However, the researchers also believe that simply removing comments that have the potential to undermine proven science can cause publications to lose credibility. Instead, Kareklas suggests that health websites should include relevant opposing viewpoints but ensure that supporting comments are abundant and can be easily verified, calling for “credible online exchanges where innovative thinking facilitates collaborative problem solving and results in improving customer welfare for all parties involved.”

Another recent study found that text messages containing educational information about the need for second dose of the vaccine for children receiving the flu shot for the first time improved the timely delivery of a second dose of influenza vaccine compared to conventional text messages and written reminders.