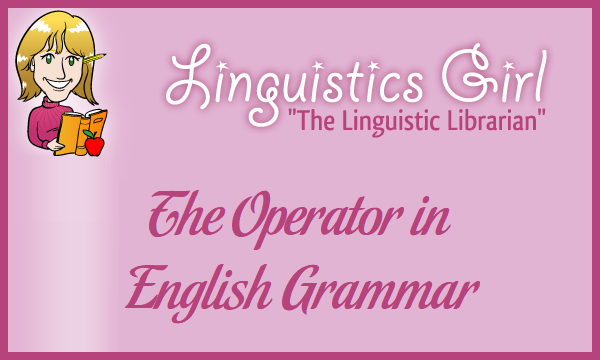 Operators are words that facilitate the expression of a negation, interrogatives, and emphasis in the English language. Operators function within verb phrases functioning as predicates. Only one grammatical form can perform the function of operator in English. The one grammatical form that can function as the operator is the verb. Only the verb do, sometimes referred to as the do-operator, can function as an operator.

The conjugations of the verb do are as follows:

The do-operator is also sometimes referred to as the dummy do.

The Operator for Negation

Negation is the grammatical operation whereby a proposition is replaced by one that states the opposite. An affirmative form expresses the validity or truth of a basic assertion. A negative form expresses the falsity of a basic assertion. The first method of negation in the English language is verb phrase negation. Verb phrases in English can be negated by inserting the negative adverb not after the first auxiliary verb of the verb phrase. For verb phrases without an auxiliary verb, the operator do also appears before the negative adverb not. For example:

Note that the do-operator expresses the tense of the verb phrase in negated constructions.

The Operator for Interrogation

Note that the do-operator expresses the tense of the verb phrase in interrogative constructions.

The Operator for Emphasis

The do-operator also expresses emphasis within verb phrases in the simple present and simple past. To emphasize an action or state, insert the operator do before the verb. For example:

Note that the do-operator expresses the tense of the verb phrase in emphatic constructions.

The only grammatical form that can function as the operator in the English language is the verb, specifically the verb do, or the do-operator.

Operators in English grammar are words that facilitate the expression of a negation, interrogatives, and emphasis.

Operator is a grammatical function.

Operators are constituents of the verb phrase.