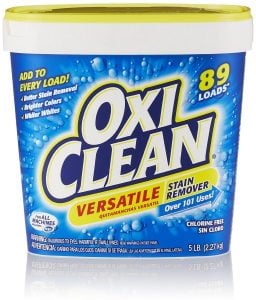 Many cloth diaperers including myself swear by OxiClean (oxygen bleach) to disinfect and brighten cloth diapers. In fact, OxiClean was patented as a cleaner, sanitizer, disinfectant, fungicide, sporicide, and chemical sterilizer. But does oxygen bleach actually work as a disinfectant? To answer the question, I whipped out my research skills. The short answer is that, yes, oxygen bleach does disinfect.

What Is Oxygen Bleach?

OxiClean is a name brand for oxygen bleach. (Much like Clorox is a name brand of bleach, or sodium hypochlorite.) One of the active ingredients in OxiClean is sodium percarbonate (Na2CO3•H2O2), an adduct of sodium carbonate (Na2CO3) and hydrogen peroxide (H2O2). (In chemistry, an adduct is a chemical addition product, that is, two or more distinct molecules combine to form a single reaction product containing all atoms of all components.) Sodium percarbonate is used in some eco-friendly cleaning products such as OxiClean and as a laboratory source of anhydrous hydrogen peroxide. Dissolved in water, the chemical yields a mixture of hydrogen peroxide and sodium carbonate. Applications for sodium percarbonate include disinfectant.

What Is Hydrogen Peroxide?

What Is Sodium Carbonate?

Sodium carbonate, or soda ash, is a sodium salt of carbonic acid commonly used as a water softener.

Yes, based on the chemistry behind the cleaning product, OxiClean disinfects cloth diapers.