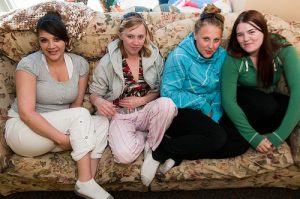 Previous studies have linked advancing paternal and maternal age with an increased risk of autism spectrum disorders (ASD). Now a new multinational study of parental age and autism risk published in the journal Molecular Psychiatry finds that the children of teen mothers, older parents, and parents with an age gap of 10 years or more have an increased risk of ASD compared with other children.

Autism Spectrum Disorder, or autism, is a developmental disorder that manifests during the first three years of life. The disorder is characterized by impaired social interaction and verbal and non-verbal communication and by restricted, repetitive, or stereotyped behavior. Some children are mildly impaired by the symptoms while others are severely disabled. Autism currently affects one in 68 children in the United States.

For the present study, researchers performed a population-based cohort study to analyze more than 5,766,794 children born between 1985 and 2004 in Australia, Denmark, Israel, Norway, and Sweden, tracking the children through 2009. The researchers sought to determine if maternal and paternal ages independently increase the risk of ASD and, if so, to what extent.

“By linking national health registries across five countries, we created the world’s largest dataset for research into autism’s risk factors. The size allowed us to look at the relationship between parents’ age and autism at a much higher resolution – under a microscope, if you will.”

Of the total children in the study, the researchers identified 30,902 diagnosed with ASD.

The prevalence of ASD also increased when both parents were older and with widening gaps between maternal and paternal ages. ASD was most prevalent among children whose fathers were between the ages of 35 and 44 and whose mothers were 10 or more years younger.

The researchers did not find an association among parental age, autism risk, and sex of the child.

“After finding that paternal age, maternal age and parental age gaps all influence autism risk independently, we calculated which aspect was most important. It turned out to be parental age, though age gaps also contribute significantly.”

The present study looked only at the “what” and not the “how,” only linking parental age to autism risk. Additional studies are needed to understand the underlying mechanisms of parental age on the risk of ASD.

Says co-author Abraham Reichenberg, a neuropsychologist and epidemiologist with the Icahn School of Medicine at Mount Sinai in New York City, New York:

“In this study, we show for the first time that autism risk is associated with disparately aged parents. Future research should look into this to understand the mechanisms.”

The researchers additionally acknowledge a number of limitations of the present study including lack of information about some variables that could affect the findings such as parental psychiatric history. Because of the use of an observational study, the researchers are also unable to rule out factors associated with parental age such as birth weight and obstetric complications that could contribute to the results.

“Although parental age is a risk factor for autism, it is important to remember that, overall, the majority of children born to older or younger parents will develop normally.”

Another recent study found that the use of assisted reproductive technology (ART) such as in vitro fertilization (IVF) may increase the risk of autism among children born as a result of the fertility treatments.