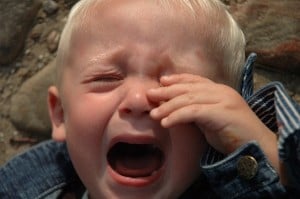 Children love to climb! My own daughter quickly and easily scales the furniture in my home. However, with climbing comes the risk of falling. And, according to a new study published in the journal JAMA Pediatrics, parenting plays a major factor for falls at home: Parents of children who fall from furniture are less likely to use safety gates around the house and not to have taught children rules about not climbing in the kitchen.

Researchers from the University of Nottingham in Nottingham, England sought to estimate associations for risk and protective factors for falls from furniture in children between the ages of 0 and 4 years old.

Using a multicenter case-control study at hospitals, minor injury units, and general practices in and around four study centers in the United Kingdom between June 14, 2010 and April 27, 2012, the researchers compared 672 children with falls from furniture to 2,648 control participants matched on age, sex, calendar time, and study center.

In 86 percent of the falls, the children sustained single injuries including bangs on the head (59 percent), cuts or grazes that did not require stitches (19 percent), and fractures (14 percent).

In 60 percent of the falls, treatment was not required after examination. In the other 40 percent, children were treated in the emergency department (29 percent), treated and given follow-up appointments (7 percent), or admitted to the hospital (4 percent).

In addition to analyzing the falls and associated injuries, the researchers also looked at safety practices, safety equipment use, and home hazards and took into consideration compounding factors such as the health of the child and quality of life through the use of parent-completed questionnaires specific to the age of the child.

Additionally, the researchers found that parents of children who fell were less likely to use safety gates or teach children rules about climbing on objects in the kitchen compared to the parents in the control group.

In other words, parenting decisions significantly affected the risk of children falling in the home.

The researchers do acknowledge limitations of the present study including the self-reports from parents of safety practices, safety equipment use, and home hazards. Additional studies are needed to assess the association of specific forms of furniture such as baby walkers and playpens with falls.

Conclude the researchers, “If our estimated associations are causal, some falls from furniture may be prevented by incorporating fall-prevention advice into child health surveillance programs, personal child health records, home safety assessments and other child health contracts.”

Parents can help prevent falls in the home by using safety gates and by teaching children not to climb on furniture especially in the kitchen.

Parenting a Major Factor in Falls at Home for Children: http://www.medicalnewstoday.com/articles/286259.php
Risk and Protective Factors for Falls From Furniture in Young Children: Multicenter Case-Control Study: http://archpedi.jamanetwork.com/article.aspx?articleid=1939058