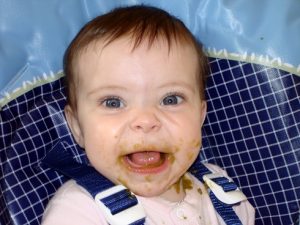 Obesity is a growing health problem among Americans of all ages. More than one-third of children and adolescents in the United States were considered overweight or obese in 2012. Now a new study published in the journal Pediatrics suggests that many parents adopt infant feeding and activity practices that increase the risk of obesity among children later in life.

Obesity is a serious health risk that increases the risk of heart disease, type 2 diabetes, stroke, osteoarthritis, and even some types of cancer.

State the researchers led by Dr. Eliana M. Perrin of the University of North Carolina School of Medicine:

“Although expert consensus and previous literature document the importance of early feeding and activity behaviors and practices in preventing obesity and the risks of early rapid weight gain, few studies have rigorously assessed obesity-related behaviors by caregivers of infants.”

For the present study, the researchers analyzed 863 low-income parents and their 2-month-old infants who participated an obesity prevention trial called Greenlight, a cluster-randomized trial of obesity prevention at four health centers. Parents answered questions about feeding and activity behaviors thought to increase the risk for obesity.

According to the study, all the parents adopted some infant feeding and activity behaviors linked to an increased risk of obesity later in life.

Among the feeding behaviors assessed, 45 percent of parents exclusively formula fed their infants while only 19 percent exclusively breastfed. Previous research has suggested that exclusive breastfeeding for the first six months of life decreases the risk of obesity and other health problems.

Twelve percent of parents introduced solid foods to their babies early. Previous research has suggested that introducing solid foods to infants before the age of 4 months increases the risk of obesity by age 3. The World Health Organization (WHO) recommends waiting to introduce solid foods until after 6 months of age.

In terms of activity behaviors, 90 percent of infants were exposed to television while 50 percent actively watched television. Previous research has linked watching television to an increased risk of obesity.

“In this multisite, large sample of geographically, racially, and ethnically diverse, low-income parents caring for 2-month-old infants, we discovered a high frequency of parent-reported behaviors that may increase their children’s risk for obesity. Even after adjusting for potential confounders, including parent age and socioeconomic status, self-reported race and ethnicity were strongly and independently associated with many of these behaviors thought to relate to later obesity.”

Although acknowledging the limitations of the present study, the researchers believe that the findings indicate parents need to do more to reduce “obesogenic” behaviors right from birth.

Concludes Dr. Perrin, “These results from a large population of infants – especially the high rates of television watching – teach us that we must begin obesity prevention even earlier.”