Connect
To Top
NewsJanuary 22, 2014 This post may contain affiliate links 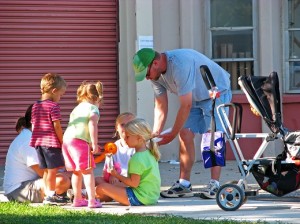 Although there has been considerable focus on maternal weight before and during pregnancy, paternal obesity may cause altered gene expression in the pancreas and fat of children, suggests new research published online in The FASEB Journal.

The researchers used two groups of male rats. The control group was lean and healthy and fed a normal diet. The test group was obese and diabetic and fed a high-fat diet.

Both groups of male rats were mated with lean female rats to produce offspring. The offspring born to the obese fathers exhibited the altered gene expression in pancreatic islets and showed a poor ability to respond to a glucose challenge despite consuming a healthy diet. Pancreatic islets are responsible for producing insulin to control blood glucose.

Explains Margaret Morris, Ph.D., a researcher on the study:

“While scientists have focused on how the maternal diet affects children’s health, this study is part of exciting new research exploring the impact of paternal diet on offspring risk of obesity. The fact that similar gene markers were affected in pancreas and fat tissue tells us that some of the same pathways are being influenced, possibly from the earliest stages of life. It will be important to follow up these findings, and to learn more about when and how to intervene to reduce the impact of poor paternal metabolic health on offspring.”

“For a long time, we’ve known that the nutrition and health status of women who are pregnant or who want to get pregnant is critical to the health of her offspring, and we’ve also suspected that the same is true for fathers to a lesser degree. This report is the first step in understanding exactly how the nutrition and health of fathers affects his children, for better or worse.”

Men who wish to become fathers should strive to maintain or achieve a healthy weight before conceiving a child.