Connect
To Top
NewsJanuary 1, 2015 This post may contain affiliate links

Pets Linked to Stronger Social Skills in Children with Autism 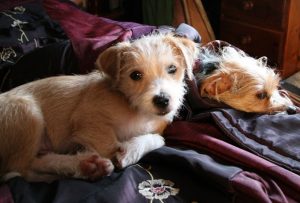 Living with pets may increase the social skills of children with autism. A recent study from a researcher the University of Missouri (MU) as published in the Journal of Autism and Developmental Disorders finds that having pets such as cats, rabbits, and other animals as well as dogs in the home may help children with autism improve their social skills.

Autism spectrum disorder (ASD) is a developmental disorder that manifests during the first three years of life. The disorder is characterized by impaired social interaction and verbal and non-verbal communication and by restricted, repetitive, or stereotyped behavior. ASD currently affects one in 68 children in the United States.

Previous studies have found that pets help encourage social interaction and that pet dogs may help children with autism develop their social skills. Dr. Gretchen Carlisle, research fellow in the MU College of Veterinary Medicine’s Research Center for Human-Animal Interaction (ReCHAI), explains that children including autistic children tend to interact and talk to each other more with animals present in the home, classroom, or other social setting.

“Kids with autism don’t always readily engage with others, but if there’s a pet in the home that the child is bonded with and a visitor starts asking about the pet, the child may be more likely to respond.”

For the present study, Dr. Carlisle surveyed parents of autistic patients attending the MU Thompson Center for Autism and Neurodevelopmental Disorders. A total of 70 families, with patients ranging in age from 8 to 18 years, participated in the study.

Of the total participants, 70 percent of the families had dogs and around 50 percent had cats. Smaller numbers of families also had other pets such as farm animals, reptiles, rodents, rabbits, fish, birds, and even a spider.

Dr. Carlisle then compared the pet survey results with assessments of the social skills of the children with autism.

According to the study, autistic children who live with dogs appear to have greater social skills. Additionally, the longer that a child lived with a dog, the more his or her social skills improved.

The study also found a link between living with any kind of pet, not just a dog, and greater social skills in children with autism.

“When I compared the social skills of children with autism who lived with dogs to those who did not, the children with dogs appeared to have greater social skills. More significantly, however, the data revealed that children with any kind of pet in the home reported being more likely to engage in behaviors such as introducing themselves, asking for information or responding to other people’s questions. These kinds of social skills typically are difficult for kids with autism, but this study showed children’s assertiveness was greater if they lived with a pet.”

The results of the study support the idea that living with any type of pet may benefit children with autism.

“Dogs are good for some kids with autism but might not be the best option for every child. Kids with autism are highly individual and unique, so some other animals may provide just as much benefit as dogs. Though parents may assume having dogs are best to help their children, my data show greater social skills for children with autism who live in homes with any type of pet.”

Other studies have also shown the benefits of living with pets on children. Last year researchers from the University of California-San Francisco (UCSF) and the University of Michigan found that children who grow up in homes with pet dogs have a decreased risk of allergies and asthma because of changes in gut microbes as a result of dog-associated dust.