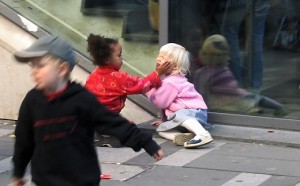 Physical aggression in toddlers develops more as a result of genetic rather than environmental factors, suggests a new study from researchers at the University of Montreal and CHU Sainte-Justine Hospital in Montreal, Canada as published in the journal Psychological Medicine.

A research team led by Eric Lacourse of the University of Montreal studied 667 pairs of twins, both identical and non-identical. The parents of the twins rated the physical aggression of their children at 20, 32, and 50 months old. Physical aggression included behaviors such as hitting, biting, kicking, and fighting.

The researchers then compared the behavior, environment, and genetics of the pairs of twins.

Despite previous thinking that considered aggressive behavior the result of environmental factors such as exposure to aggressive role models, the present study found that genetic factors also play a role in toddler physical aggression.

“The gene-environment analyses revealed that early genetic factors were pervasive in accounting for developmental trends, explaining most of the stability and change in physical aggression. However, it should be emphasized that these genetic associations do not imply that the early trajectories of physical aggression are set and unchangeable. Genetic factors can always interact with other factors from the environment in the causal chain explaining any behavior.”

Consistent with other studies on aggressive behavior, the present study found that physical aggression begins during infancy and peaks between the ages of 2 and 4. However, the researchers also determined that physical aggression was influenced by an interplay of genetic and environmental factors, not simply environmental exposure to aggressive role models. In fact, the researchers believe that genetics account for about 50 percent of the factors contributing to childhood aggression.

“Genetic factors always explained a substantial part of individual differences in physical aggression. The limited role of shared environmental factors in physical aggression clashes with the results of studies of singletons in which many family or parent level factors were found to predict developmental trajectories of physical aggression during preschool. Our results suggest that the effect of those factors may not be as direct as was previously thought.”

However, parents of toddlers who exhibit physically aggressive behavior should not lose hope. Within the nature-nurture debate, environment (nurture) can override genetics (nature).

Emphasizes Lacourse: “These genetic associations do not imply that the early trajectories of physical aggression are set and unchangeable. Genetic factors can always interact with other factors from the environment in the causal chain explaining any behavior.”

Is aggression in toddlers down to genetics?: http://www.medicalnewstoday.com/articles/271470.php
Toddlers’ aggression is strongly associated with genetic factors: http://www.nouvelles.umontreal.ca/udem-news/news/20140121-toddlers-aggression-is-strongly-associated-with-genetic-factors.html