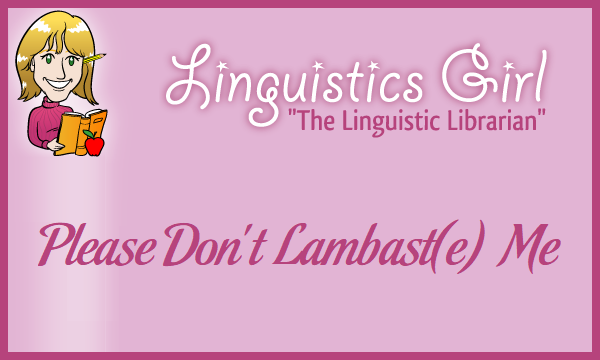 I love all forms of word play. Before Easter, I heard a local news reporter pronounce the word <lambasted> “to criticize harshly, to assault violently” as /læmbeɪstɪd/, with the second syllable of the word pronounced like <baste> (rhymes with <waste>). I figured that he had had a slip of the tongue, which happens. No big deal. The timing for a “basting your Easter lamb” joke seemed apropos. I noticed the word only because the pronunciation seemed jarring to me. I pronounce the word as /læmbæstɪd/, with the second syllable pronounced like <bast> (rhymes with <fast>). After tweeting the joke, I did not give the word a second thought.

I just heard a news reporter pronounce <lambasted> as /læmbeɪstɪd/, with the second half of the word pronounced like <baste>.

We are close to Easter, so some of us are basting our lambs, but I think he meant /læmbæst/! 😆

Until two weeks later when I posted another tweet about the word <doryphore> from The Dictionary of Difficult Words by Jane Solomon: “When it comes to #grammar, don’t be a doryphore ‘someone who is annoying because they like to point when others make small mistakes.'” Another tweeter asked if my <lambaste> tweet qualified. I still thought my “basting a lamb” joke was hilarious. Then another tweeter informed me that my “wrong” pronunciation is the pronunciation he grew up with and is still used to.

When it comes to #grammar, don’t be a doryphore “someone who is annoying because they like to point when others make small mistakes.” @janesolomon pic.twitter.com/acru7rnNKT

Astonished, I quickly began researching the word and discovered many mind-blowing facts. First, I thought that the base form was <lambast>. Wrong! The original form was <lambaste>. The <lam> is an obscure verb meaning “to beat, to lame.” The <baste> means “to thrash.” (As an aside, <lambaste> might sound sweet because of the initial <lamb>, but the etymology and word sum is anything but. To beat and to thrash: Harsh indeed!) The word sum for <lambaste> is <Lam + Baste>, resulting in the <lambaste> spelling with the final <e>.

Oh, my goodness! I am totally astounded by the word <lambasted> right now.

Before Easter, I heard a local news reporter pronounce <lambasted> as /læmbeɪstɪd/, with the second half of the word pronounced like <baste>.

I made a “basting your lamb” joke because the…

The word <lambaste> is admittedly rare in Modern English. When I looked in the Corpus of Contemporary American English (COCA) for <lambast*>, I found the following frequencies:

For comparison, the synonym <criticize> appears much more frequently in the corpus:

The infrequency of the word explains my confusion with the spelling. I likely had never seen <lambaste> in print. I may have seen <lambasted>, which is more common than the simple present form.

According to The Grammarist, “lambaste is the preferred spelling in American and Canadian English, while lambast is preferred in varieties of English from outside North America.” I tweeted an inquiry asking for a source for the assertion, but I have yet to receive a reply. In my entirely unscientific informal polling, I have found the opposite: Most of my American English-speaking friends prefer the <lambast> spelling. The preferred pronunciation is also /læmbæst/.

I shall end my astonishment with a poll.

How do you pronounce <lambasted>?

Also, if you would, leave a reply telling me your English and how you spell <lambast/lambaste>.