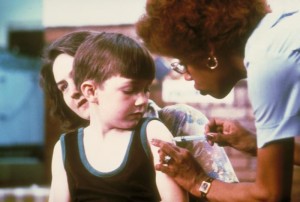 Previous studies have concluded that overall vaccination reduces the risk of non-targeted infections among vaccinated individuals. Now new research presented at IDWeek 2014 suggest that the pneumococcal vaccine dramatically reduces severe antibiotic-resistant infections by as much as 62 percent among children.

Pneumococcal disease is a bacterial infection that causes sepsis, pneumonia, and meningitis as well as hearing loss, vision loss, and death. The infection is also the most common vaccine-preventable bacterial cause of death. The pneumococcal vaccine (PCV) should be administered at 2 months, 4 months, 6 months, and between 12 and 15 months as well as to children and teenagers in high-risk groups between 2 and 18 years old.

“Pneumococcal infections can cause several clinical syndromes, including ear infection, pneumonia, and more serious infections such as meningitis and blood infections. Last year antibiotic resistance due to pneumococcal infections was deemed a serious threat in a large CDC report. It was estimated that it leads to more than 19,000 excess hospitalizations, 7,000 excess deaths, and $96 million in excess medical costs per year.”

Use of the 13-valent pneumococcal vaccine subsequently reduced the rate of antibiotic-resistant invasive pneumococcal disease by 62 percent between 2009 to 2013 among children under the age of 5, a decrease of nearly two-thirds.

Comments Tomczyk on the findings:

“We’re at risk of living in a post-antibiotic world, where these miracle medications no longer work, but this vaccine is part of the solution to protecting ourselves from the growing threat of antibiotic resistance. Not only does this vaccine prevent pneumococcal infection, which means fewer antibiotics are prescribed, but it also prevents antibiotic-resistant infections.”

Additionally, when looking at only the five extra strains present in the 13-valent pneumococcal vaccine, the researchers found an even greater reduction in the incidence of infection. Says Lindsay Kim, MD, from the National Center for Immunization and Respiratory Diseases at the Centers for Disease Control and Prevention (CDC) in Atlanta, “When we looked at the strains that are only in PCV13, we found about 93% reduction in disease.”

Concludes Andrew Pavia, a pediatrician at the University of Utah in Salt Lake City, on the importance of vaccination in the fight against antibiotic-resistant infections, “Vaccines are something that, maybe in the future, can have a large impact on antibiotic resistance.”

In other words, the pneumococcal vaccine significantly reduces the risk of infection including antibiotic-resistant infection among vaccinated children.

Currently 85 percent of children in the United States have received all four recommended doses of the pneumococcal vaccine. The vaccine is now also recommended for adults over the age of 65 as well as adults 19 and older with certain cancers, HIV, and kidney failure.