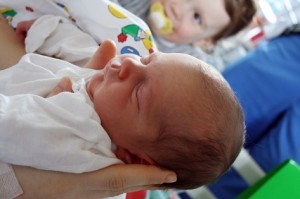 Previous studies have linked low birth weight with health problems. The present study investigated a possible link between small size in the first trimester and heart disease later in life.

Researchers from the Erasmus University Medical Center in the Netherlands studied 1,184 children, dividing the participants into two groups based on size during the first trimester of pregnancy. The children were then examined for risk factors for heart disease such as body mass index (BMI), body fat distribution, blood pressure, cholesterol levels, and insulin concentrations at age 6.

In other words, poor fetal growth during early pregnancy may be linked to poor heart health later in life.

However, Prof. Vincent WV Jaddoe, one of the authors on the study, cautions about jumping to conclusions based on the results of the study:

“This is a very specific study, the first from early pregnancy onwards. We could only include a relatively small number of subjects from a large study. We will perform follow-up studies to replicate these findings and the underlying mechanism in other study groups.”

The researchers also add that small fetal size during the first trimester is not the cause of future heart problems. Instead, small fetal size and low birth weight are both symptoms of factors that adversely affect fetal development during pregnancy.

The British Heart Foundation (BHF) has also commented on the findings of the present study:

“The first few months of pregnancy are a critical stage in a baby’s development, and this study suggests that fetal growth within this time may influence their heart health later in life. However, as the researchers acknowledge themselves, further studies are needed to understand why this pattern exists and what it might mean for preventing heart disease.”

The first trimester is critical for fetal growth and development. Women who are considering getting pregnant or who are already pregnant can take some steps to promote healthy early growth including quitting smoking and keeping a check on blood pressure.

Additional research is still needed on the possible link between poor growth during the first trimester of pregnancy and future heart health problems.