Connect
To Top
InformationApril 25, 2013 This post may contain affiliate links

Linguistic Non-errors in the English Language: Grammar Rules to Only Sometimes Follow 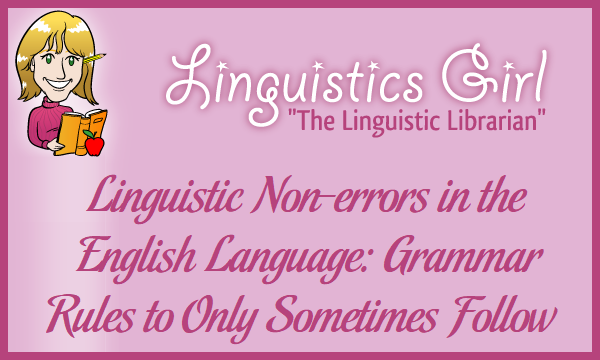 Many well-meaning but misinformed grammarians and language purists argue in favor of prescriptive grammatical rules. The English language has no shortage of prescriptions, or rules about what to do and what not to do. However, not all grammar rules are created equally. In fact, many of the most widely cited prescriptive rules for English fail to reflect actual language use by native English speakers, making the prescriptions obsolete at best and a little silly at worst. The following sections describe some of rules for the most common English errors as well as why those mistakes are actually non-errors that only sometimes need to be followed.

In other words, prepositions are perfectly fine words to end sentences with.

When Gene Roddenberry made the statement about “to boldly go where no man has gone before” in the title sequence of Star Trek, prescriptive grammarians rolled over in their graves. Another well-known proscription for the English language is to not split infinitives. However, like with the rule against ending sentences with prepositions, all native speakers of English split infinitives. For example:

Relativizing with Who and That

Modifying with That and Which

Although some writers on the subject state that the difference between less and fewer is one of singularity versus plurality, the difference in use is actually about count nouns versus noncount nouns. A count noun is a noun that can be counted: dog, keyboard, cellphone, leaf. A noncount noun is a noun that cannot be counted: rice, coffee, tea, furniture. One can speak of one dog or two dogs but not one rice and two rices (unless, of course, one is speaking about types of rices, which changes the noun rice from a noncount to a count noun).

Generations of teachers and parents have scolded children and students for uttering sentence such as The test went bad today and He dug deeper into the problem. The reason: Prescriptive grammars forbid the use of adjectives in place of adverbs. Instead of the adjectives bad and deeper, an English speaker could also say badly and more deeply.

However, the second rule that English speakers can sometimes ignore is the rule against using adjectives as adverbs. As with many categories of grammatical forms in English, the line between adjective and adverb is blurry at best. In Old English, for example, distinguishing an adjective from an adverb is sometimes possible only with the context of a sentence; for example, mislice means either “diverse” or “diversely” depending on the context. So, again, unless writing in the most formal registers, English speakers can choose to use adjectives as adverbs.

To the chagrin of many prescriptivists, the majority of English speakers at least occasionally use lots in place of a lot and til in place of until. At the same time, however, one rarely if never hears complaints about the use of math instead of mathematics or gym instead of gymnasium. Clipping—a word formation process in which a word is reduced or shortened without changing the meaning of the word—is a perfectly cromulent way in which new words become part of the English language, so do some prescriptivists wield so much animosity towards lots and til?

The most common argument against lots and til is laziness and corruption. “Saying a lot and until is just one more syllable,” argue prescriptive grammarians, “Stop being so lazy. Stop corrupting the English language.” Like with other clippings including math and gym, as lots and til continued to be used in English by native speakers, the animosity towards both forms will eventually lessen and then stop completely. In the meanwhile, however, English speakers can rest assured that sometimes using lots and til is grammatically acceptable.

Although prescriptive grammarians still vehemently support the rules about not ending sentences with prepositions, not splitting infinitives, using only the relative pronoun that for people, using only the relative pronoun which in nonrestrictive clauses, distinguishing between fewer and less, distinguishing between adjectives and adverbs, and using a lot and until instead of lots and til, all four of these grammar rules are linguistic non-errors that fail to stand the test of actual language use by native English speakers. Native speakers of English can and do use all seven constructions in their use of the English language. Therefore, English language users can rest assured that their failure to follow these prescriptive rules at all times is absolutely grammatically acceptable.