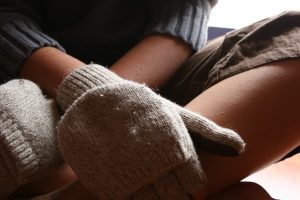 You may want to put on another sweater if you want to avoid coming down with the common cold. New research published in the journal Proceedings of the National Academy of Sciences affirms the adage that you should put on a coat to keep from catching a cold. The rhinovirus, or common cold virus, multiplies more efficiently in the cold. Additionally, lower temperatures lower the immune response in the body. Grandma was right: Being cold can increase your risk of catching a cold!

Previous studies have found that rhinoviruses replicate more efficiently in the cooler nasal cavity than in the warmer lungs. Human lungs remain around 37 degrees Celsius while the nasal cavities range between 33 and 35 degrees Celsius because of the temperature of the external air inhaled.

However, past research has not investigated the underlying mechanisms that allow the rhinovirus to replicate more efficiently at cooler temperatures, focusing only on the influence of body temperature on replication and not the relationship between temperature and immune response.

Thus, for the present study, researchers led by study senior author and Yale professor of immunobiology Akiko Iwasaki investigated whether the temperature-dependent differences in the responses of the immune system could help rhinoviruses establish infections more easily in the nasal cavity than in the lungs.

Using a rodent model, the researchers exposed the cells that line the airways of mice to a rodent rhinovirus at either 33 degrees or 37 degrees Celsius and then examined the viral replication and antiviral responses of the immune system in the cells targeted by the virus.

The researchers discovered that the virus replicated less efficiently and produced lower levels of infectious viruses at the higher temperature. Additionally, the virus prompted more robust  immune responses at the warmer temperature.

Comments Professor Iwasaki in a news release, “We found that the innate immune response to the rhinovirus is impaired at the lower body temperature compared to the core body temperature,” adding, “That proves it’s not just virus intrinsic, but it’s the host’s response, that’s the major contributor.”

Colder temperatures thus allow the rhinovirus to replicate more efficiently while decreases the immune response in the body. In other words, cold weather can increase the risk of catching the common cold. The old wives’ tale appears true: Keep warm to avoid coming down with a cold.