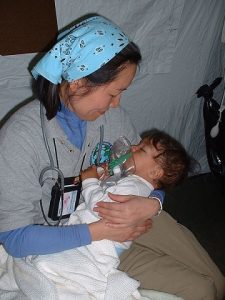 A rare form of the Enterovirus, Enterovirus 68 or EV68, has sickened 1,000 children in eleven states, sending many young patients to the hospital for respiratory distress.

Comments Dr. Richard Besser, chief health and medical editor for ABC News, “It’s the wheezing you have to watch out for.”

Although EV68 is rare in the United States, doctors at Children’s Hospital Colorado in Denver alone have identified 900 children admitted to the emergency room with symptoms of the virus. The hospital admitted 86 pediatrics patients with severe symptoms, including a handful to intensive care.

Stated Dr. Anne Schuchat, head of infectious diseases for the Centers for Disease Control and Prevention (CDC), at a press briefing on Enterovirus 68 on Monday, “Hospitalizations are higher than would be expected at this time of year. The situation is evolving quickly.”

Colorado has identified the highest number of EV68 cases. Other suspected cases have also been reported in Missouri, Kansas, Illinois, Kentucky, Iowa, Ohio, Oklahoma, Utah, and Georgia. The CDC expects the list and number of cases to grow.

Although the disease can cause serious respiratory symptoms, Dr. Schuchat offers some reassuring advice for parents. Parents do not need to worry about runny noses and sniffles, both symptoms of EV68 as well as the common cold.