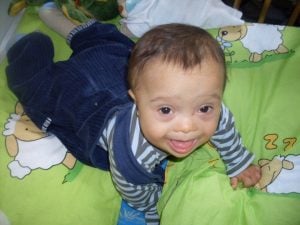 Maternal age significantly affects the risk of birth defects and genetic disorders such as Down syndrome, with older mothers having a higher risk of children born with chromosome abnormalities. Now a new study published in the journal Nature Communications offers better understanding into the mechanism behind the increased risk.

Disorders like Down syndrome occur as a result of chromosome abnormalities. For example, individuals with Down syndrome have all or part of a third copy of chromosome 21. Chromosomes consist of DNA and protein. Cells normally contain 46 chromosomes arranged into 23 pairs. Egg and sperm, or sex cells, consist of only 23 chromosomes, or one from each pair, that form when a cell divides during meiosis. Prior to separation, chromosomes exchange genetic material during recombination, a process that helps to ensure that sperm and egg cells have new combinations of genetic traits, which protects the genetic diversity of a species.

The present study from researchers at the Albert Einstein College of Medicine of Yeshiva University in New York have discovered that the process of recombination may be less regulated in older mothers, potentially leading to abnormal chromosome numbers in sex cells or large chromosomal rearrangements.

For the study, the researchers used genetic data from more than 4,200 families with at least two children who were customers of the direct-to-consumer genetic testing company 23andMe. All participants gave informed consent to provide data for the study.

“We know there are cellular processes that tightly regulate the process of recombination. So the greater rate of recombination we observed in the chromosomes of older mothers could imply that this tight regulation becomes weaker with age. Basically, recombination appears to be a more dynamic process than we previously appreciated.”

The researchers did not observe similar age-related effects among the fathers in the study.

“Our study adds to the understanding of the basic biology of meiosis and how recombination shapes the evolution of the human species. In the long run, it may help us understand how aneuploidy or certain types of genetic mutation can occur through failures of recombination.”

No clinical applications currently exist for the findings of the study.

Another study from last year suggests that, although age 35 has long been considered the magic number for safely having babies, the “risk zone” for pregnancy begins even younger, at age 30.

Baby with Down Syndrome: https://commons.wikimedia.org/wiki/File:Brian1.jpg