Connect
To Top
ReviewsJune 17, 2015 This post may contain affiliate links

Because of my background in linguistics, I appreciate the benefits of learning a second language. Unfortunately, I live in an extremely mono-lingual area with few opportunities to encounter languages other than English. Thus, I am always on the lookout for educational materials through which I can expose my children to other languages. I have previously reviewed DVDs from Rock ‘N Learn, so, when the company recently offered me the chance to review the Learn a Language DVD, I eagerly accepted the opportunity. 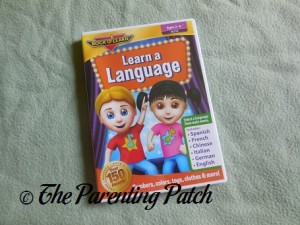 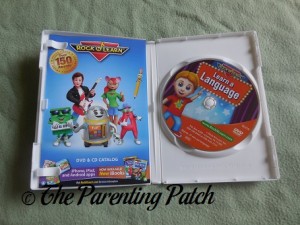 Recommended for children between the ages of 2 and 6, Learn a Language offers six languages on one DVD: Spanish, French, Mandarin Chinese, Italian, German, and English. Young children can discover a new language or practice vocabulary and counting in their first language. For the first time that I introduced the DVD to my daughter, she and I watched the English version. She then decided to watch the Mandarin Chinese version, which she found fascinating. I also viewed the German version the same day, having studied the language for a semester as an undergraduate.

Learn a Language introduces young learners to very basic vocabulary including colors, toys, clothes, furniture, and numbers in six common languages. Children will learn over 80 words and phrases in each of the six languages. The content of the DVD is simple and repetitive, which is perfect for younger children who tend to enjoy and thrive on repetition. However, although repetitive, the content remains engaging. As I played with my infant son while my preschooler daughter watched the DVD, I found myself repeating the vocabulary words in the foreign language aloud to myself. And I had not even realized that I had started speaking out loud! If the DVD can engage an adult who is only half paying attention, then Learn a Language is sure to capture the attention of toddlers through first graders.

With the same animation style of the other Rock ‘N Learn DVDs, Learn a Language holds the attention of my preschooler for the entire length of each language. She even sat through both the English and Mandarin Chinese versions without losing focus the first time that I allowed her to watch the DVD. I personally like the bright colors used throughout the Rock ‘N Learn products. I also like the consistency across the Rock ‘N Learn brand. When I first opened the package containing Learn a Language, my daughter immediately recognized the DVD as similar to her other Rock ‘N Learn DVDs and books. The consistency helps younger learners stay engaged.

In addition to capturing and holding the attention of young learners, the bright animation in Learn a Language offers visual cues that helps teach the vocabulary words in a foreign language. I know next to nothing about the Mandarin Chinese language. However, as I watched the DVD with my daughter, I was able to figure out the meanings of most of the words and phrases from the context. Watching the German version confirmed that I had been able to determine the meaning by watching the animation. My preschooler daughter was also able to figure out most of the foreign words through the visual cues.

Accessing the six different languages on Learn a Language is also quite easy. When I first popped the DVD into my player, the English version played automatically. To switch to another language, I simply went to the main menu and selected one of the six languages. Through the menu, I can also select on chapter on which to focus. I can also switch around the subtitles. Overall, I consider using the DVD features extremely user-friendly.

If you want to introduce your younger child to some basic vocabulary in one or more second languages, I recommend Learn a Language from Rock ‘N Learn. The DVD is easy to navigate. More importantly, the brightly colored animation and interesting adventures capture and keep the attention of even the youngest students. My daughter enjoys watching her copies, especially the Mandarin Chinese version. At $19.99, Learn a Language is an affordable introduction to six languages for young learners.

For more information or to make a purchase, check out Rock ‘N Learn online. You can also follow Rock ‘N Learn via email newsletter and on Facebook, Twitter, and Google+. Use the coupon code KR8822 for 25% off online purchases.