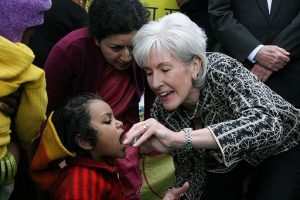 Vaccinating children against the rotavirus, a common cause of vomiting and diarrhea in children, may further protect against the seizures also caused by the virus in some children.

Rotavirus is a common virus that causes gastroenteritis inflammation of the stomach and intestines. Symptoms include severe watery diarrhea, vomiting, fever, and abdominal pain. Rotavirus is the leading cause of severe diarrhea in young children in the United States. The virus can also cause seizures in some individuals. Rotavirus is easily preventable with the rotavirus vaccine.

Because rotavirus is linked to seizures, researchers at the Centers for Disease Control and Prevention (CDC) recently performed a study to investigate whether the rotavirus vaccine also prevented rotavirus-related seizures in addition to preventing systemic rotavirus.

To ascertain the effect of the rotavirus vaccine on seizures, the researchers analyzed data from nearly a quarter of a million children in the United States born between March 2006 and November 2009. The children were all enrolled in Vaccine Safety Datalink, a project that collects data for vaccine safety research. Of the children included in the rotavirus study, 74.4 percent were fully vaccinated against rotavirus, and 25.6 percent were not.

The researchers explain the results of the study by stating that “vaccination directly prevents systemic rotavirus infection, including extra-intestinal complications involving the central nervous system.”

Daniel C. Payne, the lead author of the study, goes on to explain that fully vaccinating all children with the rotavirus vaccine could save more than $7 million in health care costs in the United States annually. Payne explains:

“Caring for children who have seizures can be expensive and emotionally taxing for families. Seizures sometimes lead to painful procedures, medication regimens, trips to the emergency room, or hospital stays.”

Dr. Geoffrey A. Weinberg of the University of Rochester School of Medicine and Dentistry, who wrote an accompanying editorial, further agrees with the need for universal vaccination based on the link between the rotavirus vaccine and the reduced risk of rotavirus-related seizures. Weinberg states:

“In addition, the work provides us an opportunity to reflect on the fact that sometimes, unexpected effects of vaccination are beneficial and are a cause for celebration, rather than the more commonly publicized concern for unexpected adverse effects.”

The rotavirus vaccine is administered orally via a dropper.