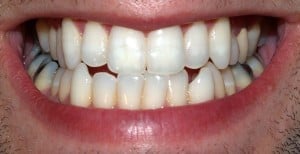 Scientists have spent the last five decades trying to figure out why fluoride added to drinking water and oral-care products prevents tooth decay, and they may finally have a two-part answer.

A new study published in the ACS journal Langumir used artificial teeth constructed of hydroxypatite to test the effects of fluoride. Unlike previous materials, which were porous and unstable, the new material is smooth and features a hard surface.

Newer studies suggest that fluoride may work in two ways. First, while fluoride does penetrate the tooth and strengthens the enamel, it doesn’t penetrate as deeply as previously believed. Scientists now believe that the fluoride penetration is stronger but less deep.

As the fluoride penetrates, it makes it harder for bacteria to stick on teeth. While bacteria continues to live inside the mouth, the chances of tooth adherence is lessened.

According to Water.EPA.gov, fluoride is a salt formed by combining minerals with fluorine. Some fluoride occurs naturally in drinking water while the rest is added based on state and local decisions.

With a better understanding of how fluoride works, researchers can now focus on figuring out the best methods for delivering fluoride.