My toddler daughter and I have been getting super crafty lately with sensory bottles. For parents and crafters not in the know, a sensory bottle is a recycled bottled filled with different objects and liquids. Sensory bottles can teach kids about sounds, colors, density, and viscosity. Making a sensory bottle is also great way to upcycle an old plastic container that might otherwise be thrown away or recycled. 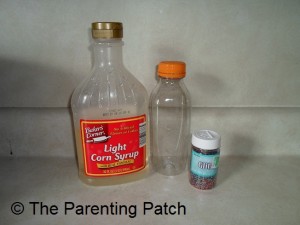 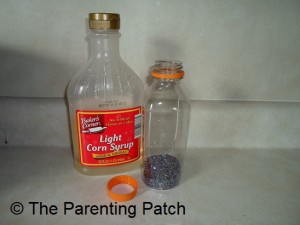 The most recent sensory bottle that my daughter and I made contained corn syrup, water, and glitter. With our glitter and oil sensory bottle turning out a big success, I wanted to expand on our use of glitter. My mom suggested using corn syrup and a little bit of water to make the glitter float inside the liquid. 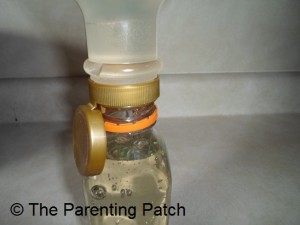 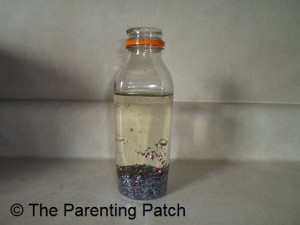 To make our corn syrup and glitter sensory bottle, I first washed out an old plastic bottle. Using an old piece of paper as a funnel, I poured a good amount of glitter into the bottle. I then added quite a bit of corn syrup and some water to make the corn syrup a little less thick. I finally had my husband screw the lid back on the bottle as tightly as possible, and then I used some electrical tape to secure the lid on. 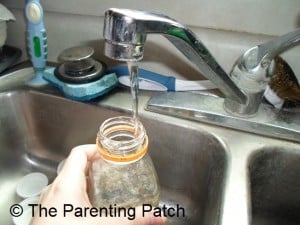 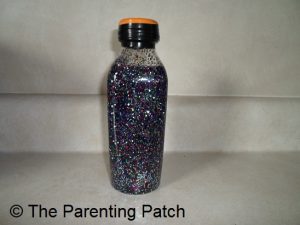 Of all the sensory bottles that my daughter and I have made, the glitter and corn syrup one is definitely my new favorite. I love to roll the glitter mixture around inside the bottle. I could sit and watch the sparkly goodness for hours. Poppy also seems to enjoy her newest sensory bottle.

What materials have you used to make a sensory bottle?