Connect
To Top
NewsFebruary 21, 2014 This post may contain affiliate links 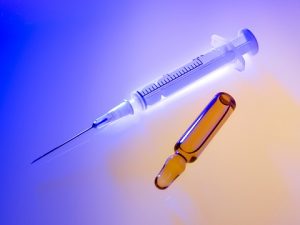 An analysis of patients seeking treatment for the flu at Duke University Hospital reveals that the most severe cases and the cases that require the most intensive treatment occur among unvaccinated individuals.

Influenza, or the flu, is a contagious respiratory illness caused by flu viruses. Symptoms include fever, chills, cough, sore throat, runny or stuffy nose, muscle or body aches, headaches, and fatigue. Complications of the flu include pneumonia, bronchitis, sinus and ear infections, and death. Influenza is not the same as the stomach flu.

In an analysis of 55 patients treated for the flu between November 2013 and January 8, 2014 published online in the American Journal of Respiratory and Critical Care Medicine, the researchers from the medical center discovered that only two of the 22 patients requiring intensive care had received the influenza vaccine prior to becoming ill.

States lead author Cameron Wolfe, M.D., assistant professor of medicine at Duke, “Our observations are important because they reinforce a growing body of evidence that the influenza vaccine provides protection from severe illness requiring hospitalizations. The public health implications are important, because not only could a potentially deadly infection be avoided with a $30 shot, but costly hospitalizations could also be reduced.”

The average patient seeking treatment for the flu during the current flu season is previously healthy young person with a median age of 28.5 years.

The H1N1 virus, the strain that caused the 2009 flu pandemic, also hit particularly hard this year. Of the total 55 patients seeking treatment at Duke University Hospital, 48 were infected with the H1N1 virus.

Says co-author John W. Hollingsworth, M.D., associate professor of medicine at Duke, “We observed a high percentage of hospitalized patients for influenza requiring ICU level care, which appears higher than observed in our hospital during the 2009 pandemic flu season “It remains unclear whether the high rate of ICU admissions represents a diagnosis bias or whether the severity of illness being caused by the current H1N1 virus is higher.”

An additional 33 patients were admitted to regular wards at Duke University Hospital for the flu rather than to the ICC. Only 11 of the 33 had received the influenza vaccine, most of whom were immune compromised, chronically ill, or taking a medication that weakened the protection of the vaccine.

Based on both rates of treatment for the flu, the severest cases strike young, previously healthy adults who did not receive the flu shot.

“Together, our observations during this influenza season support a high prevalence of the H1N1 virus affecting young adults and requiring ICU care, high false negative rates of rapid flu tests, and delay in starting antiviral treatment. Added to the finding of very low vaccination rates among both hospitalized and ICU admissions, our observations support previous findings that vaccination reduces the severity of disease and vaccinations should be encouraged as recommended by the U.S. Centers for Disease Control and Prevention.”

The best prevention for the flu is the influenza vaccine, or flu shot. The flu shot protects against influenza, not the stomach flu.

The Severest Flu Cases Are in Young, Unvaccinated Adults: http://www.medicalnewstoday.com/releases/272459.php