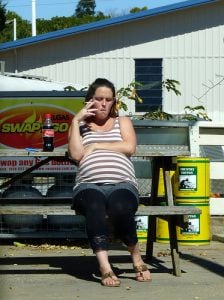 Smoking is a well-known risk factor for many complications during and health problems after pregnancy. Now a new study published in the journal Human Reproduction reveals that daughters of women who smoke while pregnant have an increased risk of developing ovarian and breast cancer later in life. The study also found that girls whose mothers smoked often begin menstruating earlier, likely accounting for the increased reproductive cancer risk.

Smoking during pregnancy has long been considered a public health risk because of the adverse effects of smoking on the unborn baby. Smoking during pregnancy increases the risk of miscarriage, stillbirth, premature birth, and low birth weight. Babies born to mothers who smoked are at an increased risk of developing respiratory problems as well as other health issues.

For the present study, researchers at the Australian National University (ANU) analyzed data on 1,500 girls from the Australian Government study (Department of Social Services, the Australian Institute of Family Studies, and the Australian Bureau of Statistics) Growing Up in Australia, the Longitudinal Study of Australian Children.

According to the study, mothers who reported smoking most days while pregnant had daughters who started menstruating earlier. Early menarche increases the risk of reproductive cancers, likely due to increased exposure to hormones such as estrogen.

Explains Dr. Alison Behie, a biological anthropologist from the ANU School of Archaeology and Anthropology:

“We’re discovering more and more that major aspects of our biology, and even our behaviour, are set before we are born.

“We know the mother’s exposure to stress, such as smoking in this case, can influence the long-term health of the child.

“Understanding factors that lead to early menarche, especially preventable ones, are important given these long term health implications and increased cancer risk for women.”

The findings of the study help mothers further understand the risks of smoking during pregnancy on unborn babies.

Another study from last year found that daughters of mothers who smoked while pregnant have an increased risk for nicotine dependence later in life.