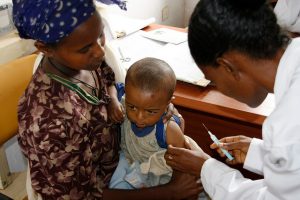 Adding to the overwhelming evidence that vaccines and autism are unrelated, a new study published in the child health-themed issue of the journal JAMA concludes that the measles-mumps-rubella (MMR) vaccine is not associated with increased risk of autism spectrum disorder (ASD) even among children at high risk for the disorder, notably children with siblings with autism.

Note the researchers of the present study including Dr. Anjali Jain of the The Lewin Group of Falls Church, Virginia:

“Surveys of parents who have children with ASD suggest that many believe the MMR vaccine was a contributing cause.

“This belief, combined with knowing that younger siblings of children with ASD are already at higher genetic risk for ASD compared with the general population, might prompt these parents to avoid vaccinating their younger children.”

“Lower vaccination levels threaten public health by reducing both individual and herd immunity and have been associated with several recent outbreaks of measles, with most cases occurring among unvaccinated individuals.”

For the present study, the researchers used a US administrative claims database linked to a large commercial health plan to assess MMR vaccine status and ASD occurrence among 95,727 children with older siblings. Of the total number of children in the study, 1,929 had an older sibling diagnosed with ASD.

Using the Cox proportional hazards model to assess ASD risk among vaccinated children , the researchers determined that the MMR vaccine, in neither one nor two doses, increased the risk of ASD.

“We also found no evidence that receipt of either one or two doses of MMR vaccination was associated with an increased risk of ASD among children who had older siblings with ASD. As the prevalence of diagnosed ASD increases, so does the number of children who have siblings diagnosed with ASD, a group of children who are particularly important as they were undervaccinated in our observations as well as in previous reports.”

Concluding, “These findings indicate no harmful association between MMR vaccine receipt and ASD even among children already at higher risk for ASD.”

Comments Dr. Brian H. King of the University of Washington and Seattle Children’s Hospital in an accompanying editorial:

“Although the evidence is already abundant that no relationship exists in the general population between MMR vaccine receipt and ASD risk, immunization rates remain low in certain populations and countries because of this inappropriate belief.

Another study from 2014 also found strong evidence that MMR vaccine is not associated with autism.