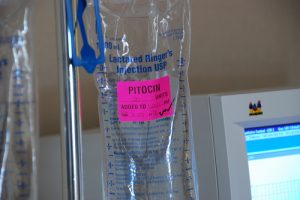 Inducing or augmenting labor with pitocin does not increase the risk of autism among children, says a new study presented at The Pregnancy Meeting™, the annual meeting of the Society for Maternal-Fetal Medicine, in San Diego, California.

Pitocin, a synthetic form of the hormone oxytocin widely used to start or assist the progress of labor, is a uterine stimulant that causes uterine contractions by changing calcium concentrations in the uterine muscle cells. The drug can also be administered after birth to prevent postpartum bleeding.

Autism spectrum disorder (ASD) is a developmental disorder that manifests during the first three years of life. The disorder is characterized by impaired social interaction and verbal and non-verbal communication and by restricted, repetitive, or stereotyped behavior. Autism currently affects one in 68 children in the United States. Boys are almost five times more likely to suffer from the disorder than girls.

Health care professions have previously expressed concerns about the use of pitocin. Prior research had suggested a potential link between induction or augmentation of labor and ASD. For example, a study published in the journal JAMA Pediatrics in October 2013 concluded that induction and augmentation with pitocin increases the risk of autism.

To determine a link, if any, the researchers evaluated the association of ASD in a large group of Utah births that occurred between 1998 and 2006 using data from birth certificates and from a registry of autism cases in the state (Utah Registry of Autism and Developmental Disabilities). The researchers compared 2,547 children with ASD to 166,283 children without the disorder.

According to the study, children exposed to pitocin during labor were not at an increased risk for autism. Says study investigator Michael Varner, MD:

“Children exposed to labor induction or augmentation did not have an increased likelihood of ASD after adjusting for important factors such as socioeconomic status, maternal health, pregnancy-related events and conditions, gender, and year of birth.”

Another recent study found that medical augmentation of labor with pitocin does not increase the risk of ADHD in a child.