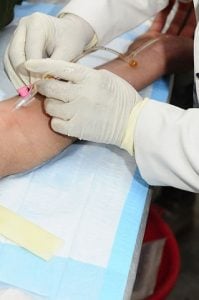 Previous research on an association between oxytocin during labor and the development of attention-deficit/hyperactivity disorder (ADHD) produced opposing results. Now a large cohort study in Denmark concludes that medical augmentation of labor does not increase the risk of ADHD in a child.

Pitocin, a synthetic form of the hormone oxytocin widely used to start or assist the progress of labor, is a uterine stimulant that causes uterine contractions by changing calcium concentrations in the uterine muscle cells. The drug can also be administered after birth to prevent postpartum bleeding.

Attention deficit hyperactivity disorder (ADHD) is a behavior disorder characterized by not being able to focus, being overactive, not being able control behavior, or a combination of the three symptoms. Experts estimate that ADHD affects 8 to 12 percent of school-age children worldwide. Boys are three to four times more likely to receive an ADHD diagnosis than girls.

A small study published in 2011 in the Journal of Attention Disorders suggested a strong predictive relationship between perinatal pitocin exposure and the development of ADHD, with double the risk among 88 children who were exposed to oxytocin to induce or augment childbirth as compared to 84 controls. However, another study published in 2013 in the journal Pediatrics found a lower risk of ADHD among girls whose birth were augmented with the drug.

In light of the conflicting findings on an association between pitocin and ADHD, researchers in Denmark sought to examine the association between medical augmentation of labor and ADHD in a large cohort study based on national register data, the Danish Medical Birth Registry.

The researchers performed a large population-based registry study using the birth records of 546,146 singleton babies born in Denmark between 2000 and 2008. Of the total births, 26 percent included medical augmentation of labor, and only and 0.9 percent of the children were identified as receiving ADHD diagnoses.

With a hazard ratio of 1.05, the researchers found no association between augmentation of labor with pitocin and ADHD among children. Writes senior researcher Mette Juhl, a Copenhagen-based midwife, in an email to The Huffington Post, “From this study, there is no indication that labor augmentation with oxytocin should increase the risk of ADHD in the child.”

Comments Lauren Streicher, MD, associate professor of clinical obstetrics and gynecology at the Northwestern University Feinberg School of Medicine in Chicago, who was not affiliated with the study, “This study is much more definitive to be able to reassure parents to say we can augment your labor and there is no reason to believe based on this very large study that this is going to increase the risk [of ADHD].”

The researchers did point out some limitations of the present study including that the question about medical augmentation of labor for the registry does not specify oxytocin specifically and that data on the amount and duration of oxytocin administered were lacking.

Concludes study co-author Mette Juhl, MPH, PhD, department of midwifery at Metropolitan University College in Copenhagen, “We recommend that future studies include a higher degree of detail in oxytocin exposure measure,” adding, “We need to conduct studies with better and more detailed data on oxytocin-infusion during delivery [which consider] dosage, administration, amount [and] duration, and studies with a specific focus on oxytocin for induction of labor.”

Another recent study did conclude that exposure to the common pyrethroid pesticide deltamethrin during pregnancy may increase the risk of ADHD.